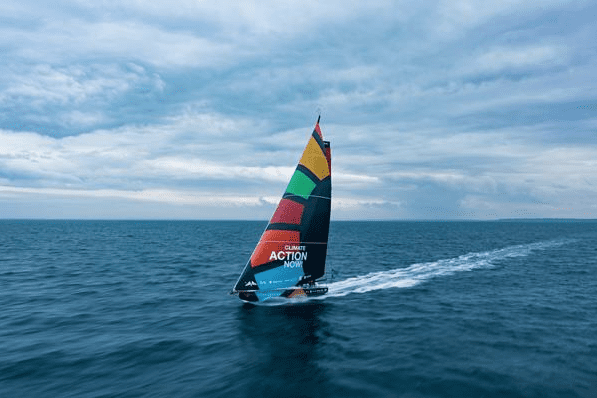 Cap Finistère is a Bay of Biscay exit that means sailors meet fewer ships than they would in the English Channel. It is a crucial stage in which it is necessary to make a first move that can prove decisive: opting for the north route (the shortest) despite its depressions or heading south (and lengthening the route) along the Portuguese coast to find the trade winds.

Among the 138 competitors, Boris Herrmann (Malizia-Seaexplorer) of the Yacht Club de Monaco (YCM) remained in the leading group of the Imoca class, while the other member of the YCM, Oren Nataf (Rayon Vert) was forced to retire from the Multi class due to a tear in the mainsail.

“We gybed just before releasing the crew and the sail tore in two. We don’t really know why. It was only three years old and not in bad condition,” said Rayon Vert’s skipper who returned to Saint-Malo port late afternoon on Wednesday, just hours after the start of the 12th Route du Rhum-Destination Guadeloupe.

“We looked at all possible solutions with Sidney Gavignet, who is supporting me on this race. We could have had the mainsail repaired, but as I’m not an experienced sailor it wasn’t reasonable to go back out to sea with a sail that was not 100% and could tear again. Also, the weather window is closing. I was all set to leave but that’s the way it is. It’s better that it happened now and not in the middle of the Atlantic. Sailing is a mechanical sport. I would like to thank all the team who have helped me. We will come back stronger in four years”.

On the other hand Boris Herrmann on the YCM Malizia-Seaexplorer is still in the race and one of 38 IMOCAs competing. After a superb start on the front line, Boris sailed close-hauled on a port tack before heading for the English coast then tacking to go through the mandatory gate at Cap Fréhel which he did at 5.00pm. He spent the first night in the lead pack, heading south as he passed Ile d’Ouessant.

The fastest boats are expected to reach Pointe-à-Pitre by about Wednesday, November 16, with the finish line scheduled to close on December 4.

3,542 nautical miles full of challenges await the participants. The road to get to the Caribbean is still long: it goes from the English Channel and its super-busy shipping routes, the capricious nature of the Bay of Biscay (with trade winds that can blow up to 25 knots), then the Sargasso Sea and its treacherous floating seaweed rafts.