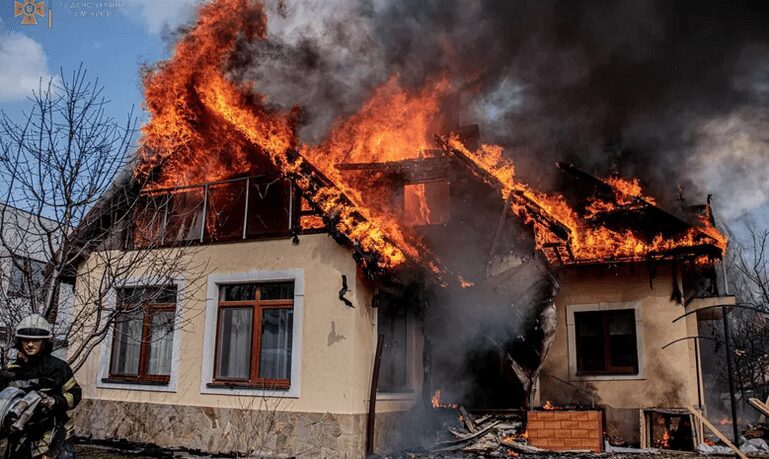 When IUM graduate student Matt Ciaccio went to Ukraine recently, it was little more than a fact-finding trip, he told NEWS.MC.

“Like so many people I know I wanted to help, but didn’t know how. Then I had the chance to go and see for myself when the father of a student friend went from Poland on one of his quite frequent visits taking medicines.”

Matt asked to go along, was accepted, and 10 days ago flew to Warsaw and hooked up with Piotr, his friend’s father, a cardiologist.

“When we crossed into Ukraine there was more traffic going in than coming out. We had seen much more traffic inside Poland, including entire convoys of Ukrainian cars and buses, full of people.”

It would appear that refugee flows have eased, at least into the part of Poland were they crossed.

Matt’s American passport aroused curiosity, rather than suspicion as they drove over to the Ukrainian side. “There were roadblocks every mile or so, and the atmosphere was tense,” he said. “But I was struck by the fact that all the gas stations had everything you needed. There didn’t appear to be any shortages, although it was clear that the country is poor, much poorer than Poland,” he added.

In the city of Lutsk, an hour and a half into Ukraine, Piotr and Matt took medical supplies from storage to hospitals across the city. “I noticed that many hospital facilities had been dispersed and hospital signs had been taken down, presumably to help prevent targeted attacks,” he added. “Also, there were no road signs, to confuse the Russians.”

Matt said he was very impressed by the fact that most people in western Ukraine were going about their daily business as much as possible. “It’s very tense, but at the same time it’s as if there’s no war. People say ‘we have to keep the economy going.’”

“Morale is through the roof. They are more convinced that they are going to win than the sun is going to rise each morning. They were the kindest people I’ve really ever met. They’d give you the clothes off their back with no questions asked.”

Ukrainian folklore: ‘Russian ship, fuck you,’ says the sign after spirited refusal of Ukrainian garrison on Snake Island to surrender

One of the stops was an Orthodox Church, where the priest explained that the schism between the Russian and Ukrainian branches was now very marked indeed, unsurprisingly given the fact that many leading Russian Orthodox clergy have given their blessing to the invasion of Ukraine.

On the Saturday evening while they were there Lutsk Airport was hit by a Russian missile attack, but it was clear that here, as in other parts of Ukraine that the war is not going Russia’s way. Shortly after the attack on Lutsk Airport, a Russian aircraft was downed by a Ukrainian missile, to the joy of those watching from the ground.

Many of those that Matt met repeated the call for the West to do more: “Many people were very grateful for the help from the States and Europe, but there were also many people who said that much more needs to be done. ‘We need a no-fly zone, tanks fighter jets, otherwise the next stop will be Poland.’”

Coming back over the border Matt’s passport was inspected again. As a 23 year-old Ukrainian he would not have been able to leave.

Now back in Monaco to finish his Masters in International Management, Matt is determined to help as much as humanly possible.

“It’s not diapers and baby formula they need at this point,” he says, “but the tools to continue the fight.”

Matt has a plan to raise money locally for medical equipment, such as bandages, and non-lethal military aid.

“We’re not going to send guns to Ukraine, but these guys need everything else, too, like Kevlar vests, helmets, flashlights. I’m going to my damndest to help them keep fighting, because they’re right. They’re in the front line for all of us.”

FILE PHOTO: A house hit by Russian shelling on the outskirts of Kyiv Reuters