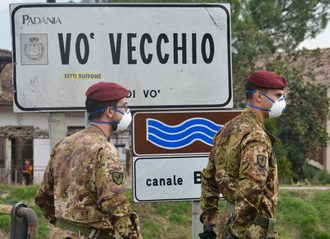 While France is imposing fines of 135 euros on those who are caught without a written reason to be out in public, the Monegasque authorities have opted for a softer approach and an appeal to civic responsibility. The only exception is for employees who will need a written attestation from their employers certifying the need for the individual to be out and about. No attestation is needed in Monaco for trips to the shops, walking the dog or taking exercise.

In Italy on Wednesday a total of 475 deaths were reported, the biggest daily jump in any country during the coronavirus outbreak. Meanwhile, in the town of Vò, in northern Italy, where the first fatality was recorded in the region, the outbreak has been halted by the introduction of tests for all its inhabitants.

“We were able to contain the outbreak here, because we identified and eliminated the ‘submerged’ infections and isolated them,” Andrea Crisanti, an infections expert at Imperial College London, who took part in the Vò project, told the Financial Times. “That is what makes the difference.”

The research allowed for the identification of at least six asymptomatic people who tested positive for Covid-19. ‘‘If these people had not been discovered,” said the researchers, they would probably have unknowingly infected other inhabitants.

Across the Channel, the UK authorities have closed schools from Friday, March 20, until further notice. They are unlikely to reopen before September.

However, Prime Minister Johnson has refused to order the closure of pubs and restaurants, an approach that has brought the ire of a number of French leaders who have hinted that unless Britain makes a stronger effort to curtail the virus UK citizens will be unable to travel to mainland Europe.

Closer to home the total number of new coronavirus deaths recorded in France for the last 24 hours stands at 89, a 51 percent increase to a total of 264. Confirmed cases now stand at 9,134.