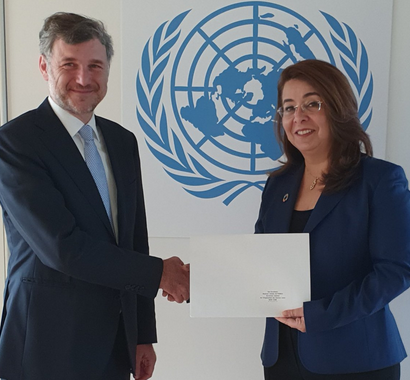 These two ceremonies were followed by cordial talks between the Monegasque delegation and representatives of the two international entities. During the first interview, Ms. Ghada Fathi Waly, who took office at the head of the United Nations Office in Vienna on February 3, addressed UNODC thanks to projects supported by the Prince’s Government and more specifically those relating to the strengthening of criminal justice in the Sahel region and the fight against trafficking in human beings in Senegal.

Mr Li Yong, during the second interview, welcomed the good relations existing between UNIDO and the Principality of Monaco. The Director-General spoke of the priorities of the Organisation he has led since 2013 and, in particular, the fight against poverty and the need for urgent cooperation in the face of the “climate crisis”. Li also praised Monaco’s commitment in these areas.

Ambassador Labarrère assured his interlocutors of the Principality of Monaco’s full support for the principles of multilateralism, international cooperation and the mandates of these International Organisations.

UNODC, founded in 1997, is a global player in the fight against illicit drugs and international crime. It is also the body responsible for the United Nations program against terrorism. UNIDO, for its part, is responsible for promoting and accelerating inclusive and sustainable industrial development in the Member States.