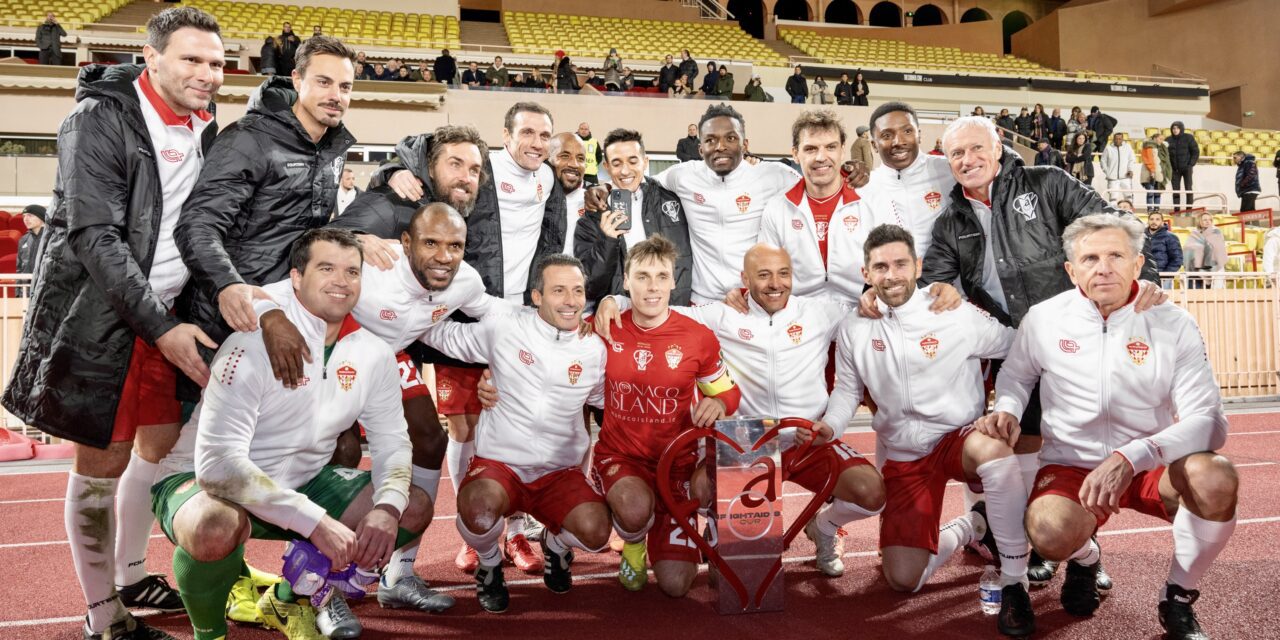 The Fight Aids Cup returned to the Stade Louis II in an exciting third edition on Monday, January 23, as HSH Prince Albert’s Barbagiuans battled it out on the pitch against Princess Stephanie’s Cirque FC, and finally found success in this charity match against their famous and formidable opponents.

Lining up alongside the Barbagiuans’ team captain Louis Ducruet was the Principality’s own Charles Leclerc, completing an already star-studded side composed of former AS Monaco players, including Claud Puel and France’s national team coach Didier Deschamps. However, the Barbagiuans had their fight cut out for them with the likes of Robert Pires and Clarence Seedorf among other legendary players in Cirque FC.

Before the action ensued, the match was royally kicked off by Camille Gottlieb and Prince Albert.

Draped in blue and black, Cirque FC dominated the first half, spending over twenty minutes on their opponents’ side of the pitch. Despite their best efforts, Princess Stephanie’s men could not get past Barbagiuan goalkeeper Diego Benaglio, who kept the ball at bay.

Playing in a fittingly chosen No.16 jersey, Leclerc appeared to be a player reborn on the pitch, putting in a more impressive performance with the Princely side compared to the previous edition. After a tough 30 minutes, the Monegasque driver was substituted off to the screams of starstruck supporters in the stands.

Having played on the back foot for the majority of the first half, the Barbagiuans surprised by scoring the first goal of the match, on their first attempt. After a fluid bit of teamwork, Sonny Anderson was found in the box with a cross, and finished it off with a delightful header to open the scoring. Not satisfied with the surprising setback, Pires managed to score shortly after Anderson to equalise, just before the first half could conclude.

The second half saw the Barbagiuans shine, reversing the trend of the first half and imposing themselves onto the right side of the pitch. Former ASM captain Eric Abidal reinforced the Prince’s team, while the red and whites’ former no.10, Fernando Morientes breathed new life into the match. At the 50th minute, Morientes proved himself to be a super substitute, as he bagged a headed goal of his own to get the Barbagiuans back ahead by 2-1.

Just three minutes later, Ludovic Giuly further extended the Barbagiuans lead with yet another goal to bring them firmly ahead by 3-1. With the first Fight Aids Cup victory now in sight, Ducruet and his men had to do their best to endure repeated attacks by a Cirque FC side that was down but not out of the fight.

A Seedorf penalty was swiftly saved by Manuel Vallaurio, who replaced Benaglio in goal. Another opportunity was squandered by the Dutch midfielder, but he was eventually rewarded for his efforts with a sweetly struck goal minutes from the end of the fixture. The final whistle eventually blew to signal a 3-2 victory for the Barbagiuans, their first ever in First Aids Cup history.

Speaking after his side’s long awaited win, Ducruet said: “I am very happy with this third edition where the atmosphere at the stadium was exceptional.  The players came with a smile and the desire to put on a show!  I thank them all, as well as the partners, the volunteers.  Thank you of course to the public for coming, for the good cause. The 2023 FIGHT AIDS CUP was a huge success on every level.  We look forward to seeing you again in 2024 and, I hope, always more!”