THIS WEEK IN MONACO – NOVEMBER 14 TO NOVEMBER 20 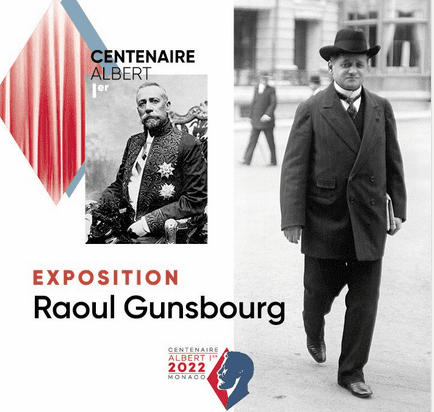 An emblematic figure in opera management, Raoul Gunsbourg was director of the Monte-Carlo Opera from his appointment by Prince Albert I in 1892 until 1951. Because of his creative audacity (countless world premieres in Monte-Carlo, including L’Enfant et les sortilèges de Ravel, La Rondine de Puccini, Le Jongleur de Notre-Dame de Massenet, Hélène de Saint-Saëns, Pénélope de Fauré, etc.), his artistic flair to attract the greatest singers (Enrico Caruso, Féodor Chaliapine, Nelly Melba…), we can consider him as a master of his craft.

This exhibition is organised by the Monte-Carlo Opera to mark the centenary of the death of Albert I and it takes place from Monday November 14 until Friday November 25 at the Grimaldi Forum Monaco – Salle Indigo, from 12:00 to 19:00.

The certainty of uncertainty: economics and geopolitics – talk

Monaco Méditerranée Foundation organises a conference with American economics journalist and author Alain Friedman.
This talk is in English with translation into French. On November 15 at 18:30 at Salle des Arts – Monte Carlo ONE. Admission is free, registration necessary. Discover more and register here.

Based on the tragedy of the Danish slackrope dancer Hedvig Jensen (born 1867), working under the stage name of Elvira Madigan at her stepfather’s travelling circus, who runs away with the Swedish nobleman Count Sixten Sparre. A mad love ignites them and each abandons their duties, she the circus, her friends and her public, him, his wife, his children and the army. They soon flee their country to find refuge in the Danish countryside, where they experience intense happiness. But the hostility to their illegitimate affair and the precariousness of their lives become heavy.

On Tuesday, November 15 at the Théâtre des Variétés. The screening in its original language, Swedish, with French subtitles, will begin at 20:00. Discover more at Tout L’Art du Cinéma website.

La Douleur (Pain) is an autobiographical account, a journal of fraught absence, doom-laden waiting, terrible fear, crushing despair, shame of living while waiting for the return of Robert L., husband of Marguerite Duras, deported to a German concentration camp.

Dominique Blanc interprets one of the most disturbing texts of post-war literature, Marguerite Duras’ diary in which she records her life after the liberation of Paris and the wait for her husband’s return.

Directed by Patrice Chéreau & Thierry Thieû Niang, starring Dominique Blanc, member of the Comédie-Française. On Wednesday, November 16 at 20:00 at the Théâtre Princesse Grace.

Discover more and reserve your tickets at the TPG website.

Monte-Carlo Philharmonic Orchestra presents La Damnation de Faust, original libretto by Hector Berlioz and Almire Gandonnière based on the translation of Faust by Johann Wolfgang von Goethe by Gérard de Nerval, Music by Hector Berlioz (1803-1869). On Wednesday, November 16 at 20:00 and November 19 at 19:00 (by invitation of the Palace) at Salle des Princes, Grimaldi Forum. Discover more and book your ticket at the Grimaldi Forum website.

Ania Guillaume, a sculptor based in Monaco, is exhibiting in the premises of the Monegasque National Committee for the International Association of Plastic Arts at UNESCO, chaired by Marie-Aimée Tirole.

The exhibition presents her work: sculptures to pose and sculptures to wear: wearable art. Each jewel is a unique specimen. Her work represents aspects of the natural world, both very fragile and powerful. The exhibition will be held from November 16 to 30, from 11:00 to 19:00 in the AIAP-Monaco hall, 10 Quai Antoine 1er (1st floor). Read more here.

The long life of the Book of Kells – talk (in English)

It is regarded as one of Ireland’s greatest cultural treasures, described by some as ‘the most famous manuscript in the world’. But what is it about the Book of Kells that makes it so famous? Why do over one million people a year of all faiths and ages visit a 1,200-year old copy of the New Testament? In this talk Dr Moss will explore the long history of the manuscript, from its creation to the circumstances of its miraculous survival during the turbulent late medieval and early modern period in Kells to its deposit in Trinity College Library. The transformation of the manuscript from a sourcebook for biblical scholars to a national icon in the nineteenth century will be explored, together with its influence on Irish cultural life, ranging from the works of Joyce to the Irish pub.

A talk (aprox. 1 hour) is followed by a drink. Dr Rachel Moss is a professor at Ireland’s number one university Trinity College Dublin and an authority on the art and architecture of medieval Ireland.

On Thursday, November 17 at 19:00 at the Princess Grace Irish Library.

Discover more and reserve your tickets at PGIL website.

“From One World To Another: Healers and Magical-Religious Rituals” by Didier Vidal, anthropologist and ethnologist, lecturer at the Faculty of Medicine in Montpelier and head of educational engineering at the Centre Hospitalier de Thuir. This lecture, which covers a variety of fields, looks at the use of magic and religion in healthcare and rituals practised today in Reunion, Mauritius, Senegal, and Cuba.

The temporary exhibition “From One World To Another, From The Visible To The Invisible”, invites visitors to discover previously unseen and original collections kept at the Monaco Museum of Prehistoric Anthropology, where some of them have been for more than a century. Until Saturday December 31 at the Musée d’Anthropologie Préhistorique.
Discover more at the Museum’s website.

About forty paintings by the Monegasque artist Michel Aubéry are exhibited at the Oceanographic Museum. Through an expressionist and fantastic art mainly worked in stencil, Posca markers and acrylic paint, the artist passes a message of protection in favour of these emblematic animals: white foxes to stoats to humpback whales.

The immersive exhibition includes corridors marked with autographs, reconstructions of dressing rooms, and some exclusive, never-before-seen content on stars who have performed in Monaco.

It is also an opportunity to discover music from the “inside”. Visitors will be able to listen to guitars vibrating to the sound of iconic riffs, enjoy an astounding and unique version of the famous song “My Way”, experience the feelings of being onstage as well as learning the ties that bind Ella Fitzgerald and Alicia Keys, or what Céline Dion, Mariah Carey and Josephine Baker have in common.

Monaco Onstage – 100 ans de concerts à Monaco promises a musical and visual experience like no other.