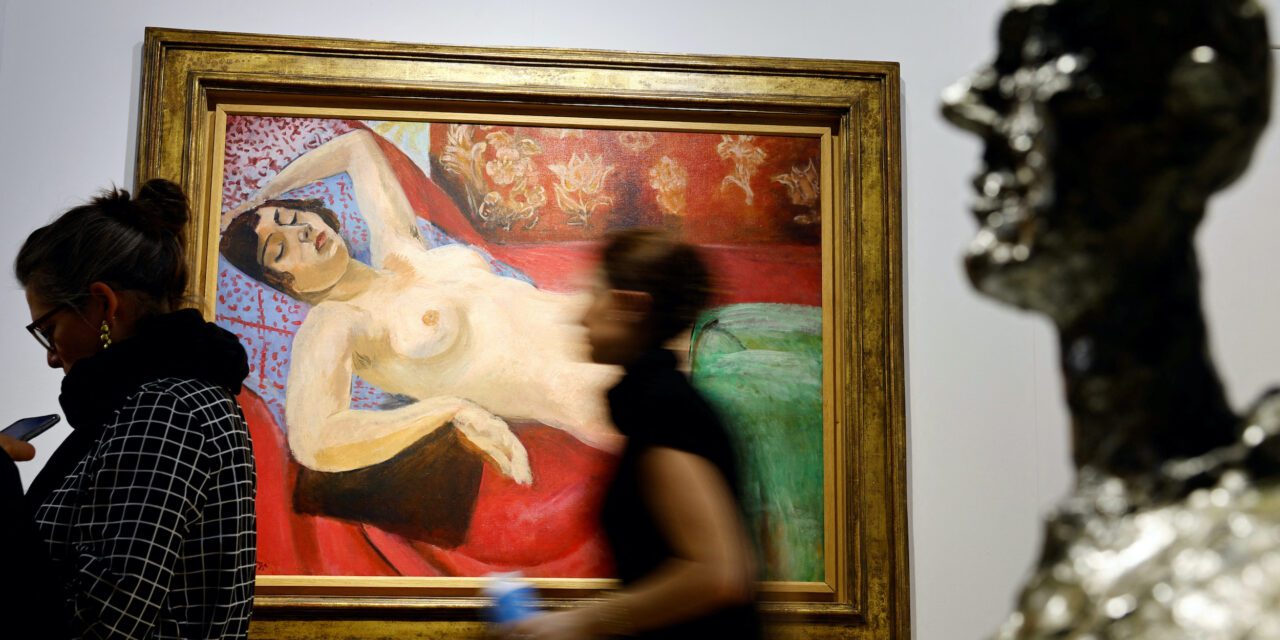 PARIS (Reuters) – Paris is staking a claim to being a global centre for contemporary art sales with a revamped fair that hopes to woo more international buyers and build on the attraction of the city’s rich cultural legacy.

The event, “Paris+ par Art Basel”, was awarded to Art Basel, one of the giants in the art world, which hosts fairs in Switzerland as well as Miami and Hong Kong.

Organisers and gallery owners are expressing optimism for bumper sales – especially as the in-person art scene reawakens after the coronavirus pandemic and social media has provided greater virtual marketing opportunities.

“A gallery sold three paintings to two different collectors in the 10 first minutes of this fair, so optimism is expected,” Clement Delepine, director of the event, told Reuters at Wednesday’s preview, ahead of Thursday’s public opening.

Pieces by Pablo Picasso, Tom Wesselmann, Henri Matisse, Joan Mitchell, Edvard Munch and more recent works by artists such as Tschabalala Self, Maxwell Alexandre and Sung Tieu are on display. They range in price from 1,000 to 30 million euros.

“We represent all parts of the market, with unprecedented quality. The galleries bring their major works because they know that they will attract collectors,” Delepine said.

The Paris event replaces the International Contemporary Art Fair (Fiac) and follows the high-profile Frieze fair in London. It is taking place at the Grand Palais Ephémère, beside the Eiffel Tower, with 156 galleries from 30 countries.

Frieze, which also has events in New York and Los Angeles, hosted first edition in Asia last month, in Seoul, reflecting growing interest among millennials, who often see art as an investment in a favourable tax regime in South Korea.

Works by Swiss artist Alberto Giacometti are among those on display at gallery owner Kamel Mennour’s stand in Paris.

“To work with Art Basel attracts a new type of public, coming from America and Asia. Paris already has a lot of energy, but this creates an acceleration. Paris is booming,” he said.

“If I was an American, I would come to Paris,” he added, citing the attraction of cultural institutions such as the Cartier Foundation, the Pompidou Centre and the Orsay Museum.

A few stands down, gallery owner Emmanuel Perrotin is enthusiastic about the rise in interest in contemporary art.

“Nowadays, everyone is talking about us and tools like Instagram has made this a worldwide phenomenon, our galleries have never been so visited – physically or virtually,” he said, reflecting on the change since he first started in the business.

Renewed interest in Paris, which benefited from the uncertainties around Brexit affecting London’s art market, has led to the opening of numerous new galleries in the city.

Peter Kilchmann, whose gallery in Zurich spotlights Swiss and Latin American artists, has just opened a space in the Marais area of Paris.

“During the COVID (pandemic), it became clear to me that I wanted a city that was accessible by train. Paris is the only big city in the continent, the only important city for contemporary art, so it was an obvious choice,” Kilchmann told Reuters.