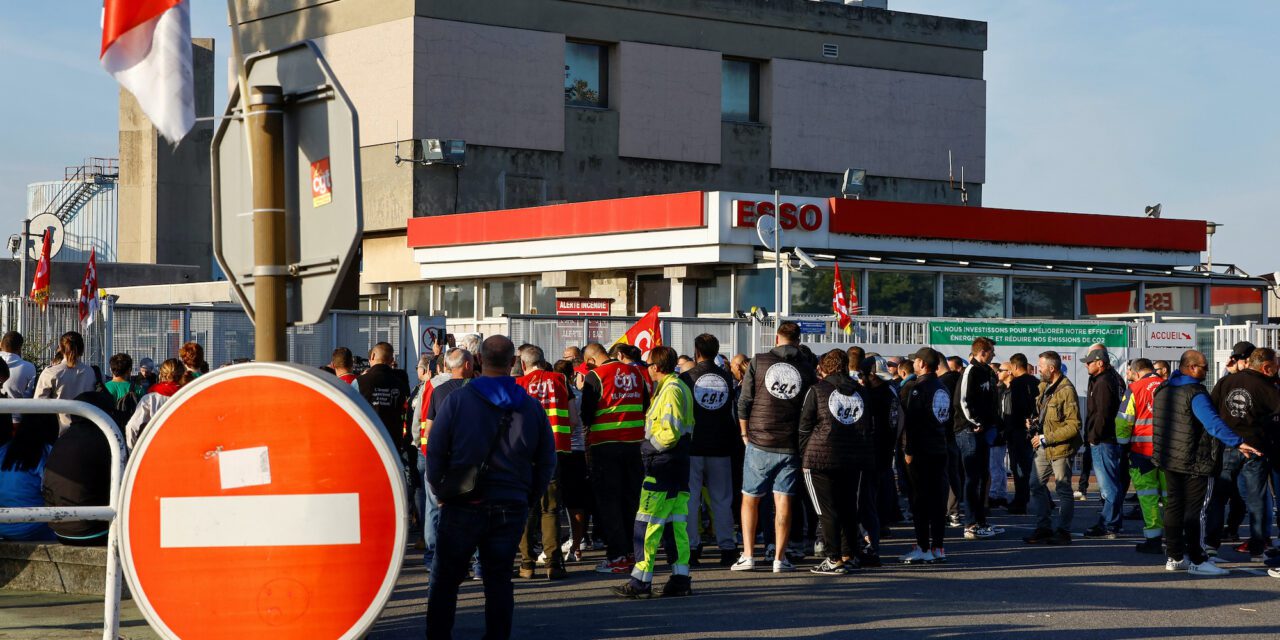 By Dominique Vidalon and Tassilo Hummel

PARIS (Reuters) -The French government on Tuesday said it would requisition staff at some petrol depots as it battles to secure petrol supplies following weeks-long strikes, putting it on a collision course with the hardline CGT union as social tensions rise.

After shying away at first from interfering in labour disputes pitting the hardline CGT union against oil majors TotalEnergies and Exxon Mobil, the government on Tuesday tried to win back control of the situation, as the first French regions needed to start rationing fuel.

Prime Minsiter Elisabeth Borne announced the government was prepared to use force to order staff at depots run by Exxon’s Esso France unit back to work, with similar measures possible at Total sites if wage talks won’t bring about a solution.

The CGT union called the plans “violent” and suspended all ongoing negotiations with government and employers on a national level and across business sectors – and announced additional strikes at Total’s Donges refinery.

Walkouts and unplanned maintenance at refineries run by oil majors TotalEnergies and Exxon Mobil have forced more than 60% of France’s refining capacity offline and blocked distribution from fuel depots.

31% of service stations throughout the country were grappling with supply problems on Tuesday, leading to rationing in some regions including the Alpes-Maritime, Var and Vaucluse departments in the south.

“We want this situation to change fast,” Prime Minister Elisabeth Borne told the lower house of parliament, adding the government was prepared to take further action if needed.

“I have therefore asked the prefects, as permitted by law, to requisition the personnel needed for the functioning of the company’s depots,” she said, referring to Esso France.

“The orders are ready”, a source at the energy ministry said, adding that requisitions would only take place if the situation at the depots does not improve.

The source added the government was already seeing some signs of improvement at Exxon’s Port-Jerome depot in Normandy and at TotalEnergies’ Dunkirk depot in northern France after the Prime Minister’s announcement to use force if needed.

TotalEnergies on Wednesday said it would offer to hold first talks with unions who don’t participate in the strikes, adding that the CGT union was “welcome” if it ends the walkout – a condition the union had firmly rejected as “blackmail” earlier this week.

By contrast, formal wage talks have been ongoing for some weeks at Esso France, where management reached a deal with a majority of unions on Monday – but not the CGT.

The refineries stoppages in France are among the longest since the cost-of-living crisis intensified this year. They have caused snaking queues at French service stations and sent diesel refining margins to record highs in Europe and the United States.

TotalEnergies’ 240,000 barrel-per-day (bpd) Gonfreville refinery is offline, while deliveries of refined products are blocked at the 119,000-bpd Feyzin refinery, which is closed for unplanned maintenance but has fuel in storage, and at the Cote d’Opal and La Mede fuel depots.

Two Exxon Mobil refineries have also been out of action since late September.

France is ramping up imports to cover the production shortfall. Diesel imports for the first 10 days of October were 37% higher than the whole of October last year, Vortexa senior market analyst Pamela Munger said.

Esso France said it had reached a salary deal with unions on Monday. Even so, it would take time for supplies to be released, said Transport Minister Clement Beaune.

The deal is among the most generous offered to workers in Europe, based on recent pay deals, and may worry companies and policymakers alike that it sets a precedent.

CGT said it had not signed off on the deal, and its workers remained on strike. It is demanding a 10% rise.

The strikes have exacerbated discontent within trade unions towards Macron, who this autumn delayed a final decision on his contested plans for pension reforms, wary of frustration over the cost-of-living crisis.