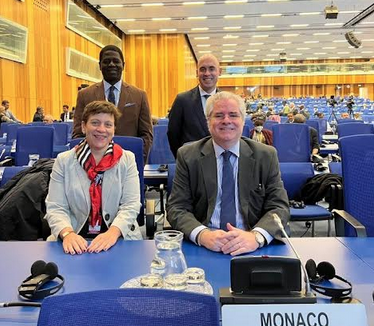 A Monegasque delegation, led by Isabelle Rosabrunetto, Managing Director of the Department of External Relations and Cooperation, took part in the work of the 66th General Conference of the International Atomic Energy Agency held in Vienna from September 26 to 30.

In her address to the plenary session, Ms Rosabrunetto stressed the importance of ensuring the safety and security of nuclear facilities and welcomed the Agency’s commitment in this area, especially in Ukraine.

She also reaffirmed the importance of scientific applications of nuclear technology for the protection of the environment and human health.

The Principality confirmed its financial support for the PACT Program (Action Program for Cancer Therapy), particularly the ‘Rays of Hope: Cancer Care for All’ initiative, as previously reported.

The director-general reiterated his thanks to Monaco for its contribution to research for more than 60 years, underlining the Principality’s attachment to preservation of the oceans, the marine environment, and the fight against plastic pollution under the leadership of HSH The Sovereign Prince.

PHOTO: The Monegasque delegation was made up of Ms Isabelle Rosabrunetto, Director General of the Department of External Relations and Cooperation (DREC), of HE Mr Lorenzo Ravano, Ambassador, Representative of Monaco to the IAEA in Vienna, of Mr Tidiani Couma, Secretary of External Relations within the DREC, and Mr Andrea Colombo-Pastorelli, Second Secretary at the Embassy of Monaco in Germany.