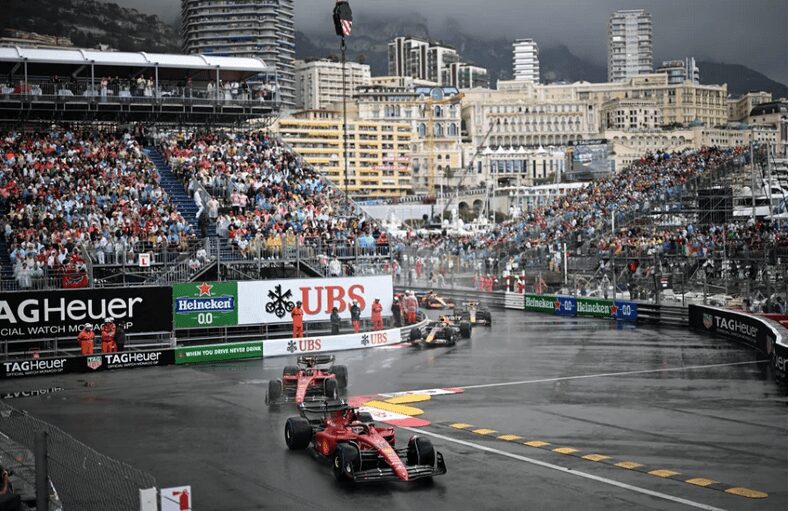 My wife is complaining again about too many noisy cars. I explain to her once more that the noise is an important element of the Monaco Grand Prix.

Unlike many Monaco residents we didn’t escape to our country house because we already live in a leafy part of Beausoleil, so there is no need to flee. But we could still hear it.

We heard the start delayed by more than an hour and it was the same rain falling on blvd de la Republique that fell on Rascasse. Sitting sheltered from the downpour on our covered terrarse I thought pityingly of the poor people huddled under multi-coloured golfing umbrellas on the balconies of Ostende, Kennedy and Spelugues and recalled again the comforting fact that rain is a great leveller.

Soon, the Automobile Club will revert to being what it’s best at, a luncheon club for mature men who don’t go out at supper time because that’s too late.

There is sport, too, in le Club, as elderly males, myself included, stagger at frequent intervals to the loo behind the 1904 Renault 2, strategically placed to offer something to grab onto when the left knee gives way.

“Is he staggering because of his bad leg or because he’s had one glass of (truly excellent) white wine too many,” I wager to myself, alone on the best table in the place, artfully hidden behind the 1908 Packard.

I love the Automobile Club. I wish they had rooms so I could check in and never leave.

In the middle of the week I went to something called the Monaco Screaming Festival at the Grimaldi Forum. What will they think of next?

On Friday my wife suggested I might take her to dinner at our favourite restaurant in Monaco, the Indian Star in Beausoleil. We love it here and usually we sit inside to suck up the sub-continental ambiance of red wallpaper and orange-clad dancers, but tonight we had to sit outside.

Once again the cars bothered my wife.

“Don’t they have anywhere else to be?” she asked.

FILE PHOTO: Driving in the rain in Monaco Reuters