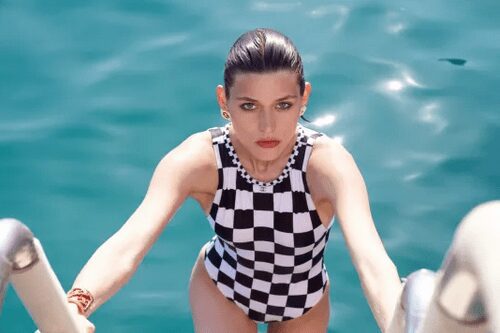 Monaco, or rather Roquebrune, provided the backdrop on Thursday for Chanel’s first catwalk show ‘outside France’ since the pandemic put an end to such frivolity.

In the fashion house’s own words, Monte-Carlo’s ties with Chanel were forged in the 1910s, when Gabrielle Chanel discovered the Principality of Monaco and its region, then strengthened thanks to Karl Lagerfeld from the 1980s. Today, through the Cruise 2022/23 collection, Virginie Viard is reviving the Riviera spirit, imbued with freedom and refinement, which translates the idea of fashion rooted in modernity.

Unfortunately it was a dull day just across the border in France, where 67 underfed models strutted past sun loungers in place of the gilded chairs of Paris fashion week.

Traditionally, the cruise show is intended to inspire well-heeled clients who need something summery for cruises to exotic parts over the winter months, but needless to say the clothes offer inspiration for lesser mortals for the coming summer. I certainly took notice of the small pillbox handbags made to look like slot machines.

Now, fashion shows are also very much about the virtual world and social media. “In the past we were very focused on the people invited to the show, but now we are thinking just as much about the people who aren’t in the room,” Bruno Pavlovsky, Chanel’s president of fashion, said.

“Putting on a beautiful show is a way of nourishing the imaginary idea of what Chanel is. The guests here in Monte-Carlo are privileged, of course, but they are not the only people we think about any more.”

Chanel has been in the news recently after several Russian influencers, including at least one based in Monaco, complained about the house’s vigorous implementation of sanctions due to the brutal invasion of Ukraine and took to social media to cut up Chanel handbags with scissors.

While the models paraded under the clouds on Thursday, an armed robbery took place at a Chanel store near Place Vendome in Paris. Four robbers emerged carrying unfashionable back plastic bags and sped off on two motorbikes. No-one was hurt in the robbery and the value of the loss is not yet known.

However, Chanel’s bottom line will not be dented, as in the last available year for statistics, it turned over 10.1 billion dollars. The US is the biggest market, followed by China and France.

© This article is copyrighted and cannot be copied, reused, posted to social media or otherwise disseminated without attribution and a hyperlink back to the original. NEWS sarl is a company registered in the Principality of Monaco

PHOTO: Ready for the pool Chanel