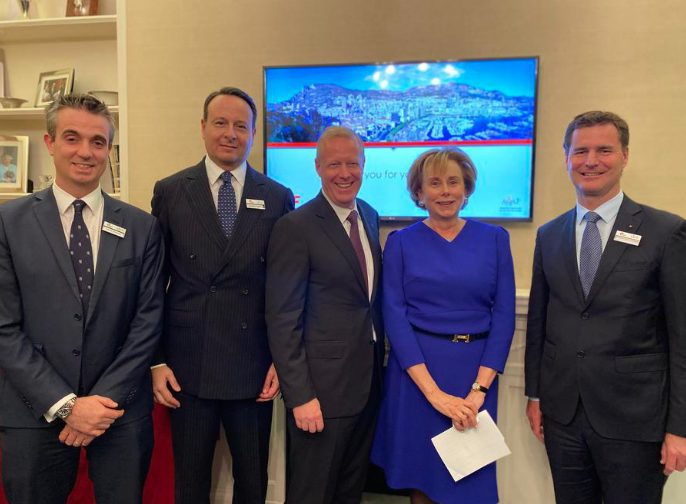 The Monaco Economic Board co-hosted a dynamic networking event with around 30 guests in attendance at the Monaco Embassy in the UK on Thursday, February 6, 2020.  The evening opened with an introduction by Vahe Vartanian, CEO and Founder of Global Family Office Community followed by a speech by HE Mrs Evelyne Genta before the main presentation by Mr Federico Limiti, Head of Private Banking of CMB (Compagnie Monégasque de Banque), with a special focus on Family Offices and the new relevant regulations in Monaco pertaining to such structures.

Mr Vahe Vartanian whose growing community offers specialist advice and support for Family Offices worldwide had previously run a series of successful events at the Embassy. Mr Vartanian announced an exciting development as he confirmed an inaugural Family Office Conference in Monaco which will take place on April 21, 2020.

HE Mrs Evelyne Genta gave a speech reframing the Principality within the current economic and political climate and highlighting Monaco’s quality of life and high level of security. The Ambassador then spoke about the process of obtaining residency and invited guests to contact the Embassy for any further advice on moving to Monaco.

Guests then proceeded to a more informal networking session over drinks; the Embassy received positive feedback from the attendees as they were able to make new relevant connections. Many reported they were pleased to have the opportunity to come to the Embassy and have a direct route for any potential questions regarding life in the Principality.