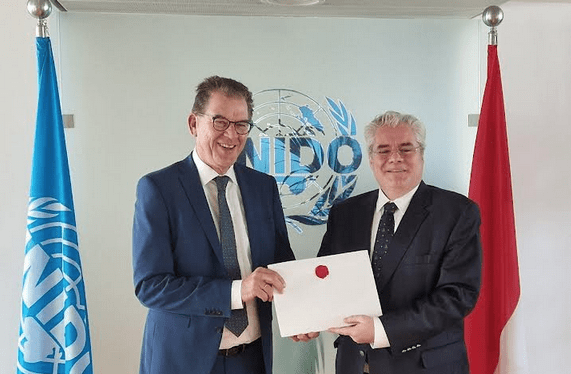 During the meeting that followed, Mr Muller spoke about the importance of promoting the development of low-carbon industry, making it possible to reconcile industrial development and the fight against climate change. He also hailed the ambitious goals achieved by Monaco, which he described as a model in this area.

HE Lorenzo Ravano reaffirmed the Principality’s full support for the work of UNIDO, in particular through the co-financing, by the Prince’s Government, of a program in favour of strengthening the empowerment of women in Tunisia.

This program, implemented by UNIDO in partnership with the Union for the Mediterranean, aims to promote the development of micro, small and medium enterprises run by women in order to create more business and employment opportunities for women in Tunisia.

The Ambassador also highlighted the Principality’s tradition and capacity for innovation, its expertise in heat pump technology, and its investment strategy in the renewable energy sector, intended to meet the target of carbon neutrality.

UNIDO’s mission is to promote and accelerate inclusive industrial development and sustainable development in Member States, as well as advising and supporting countries in the development of industrial policies, the creation of new industries or improvement of existing industries. Monaco has been a member of this Organisation since 2003.