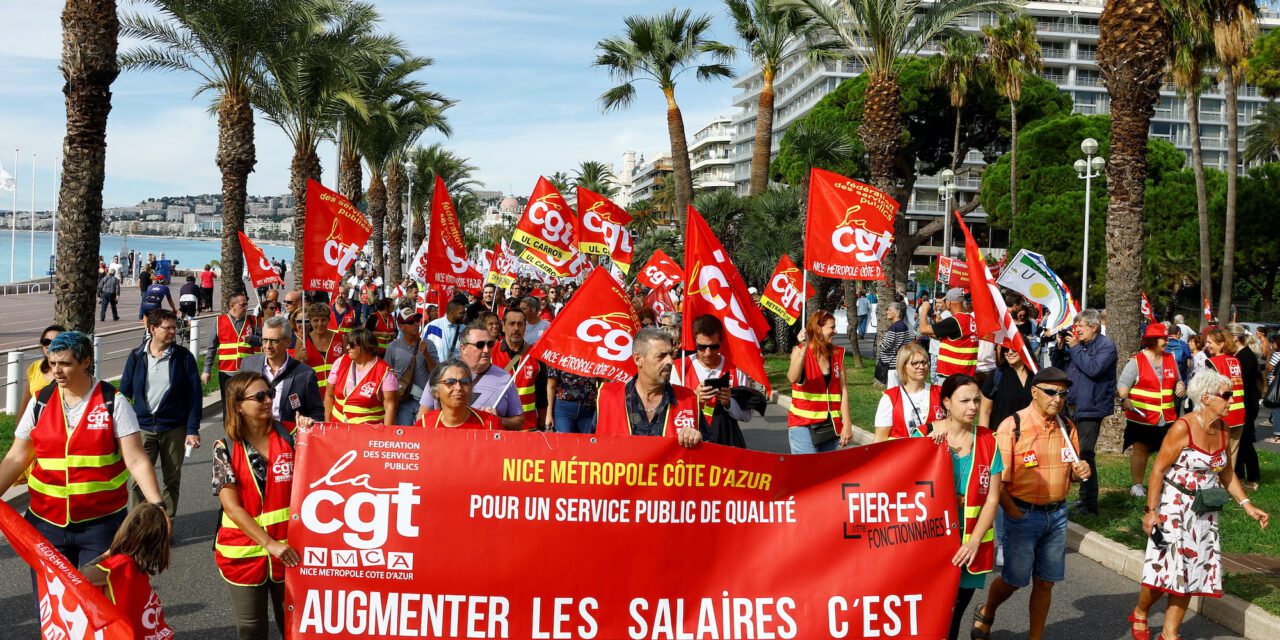 PARIS (Reuters) – A nationwide strike on Thursday disrupted the French energy sector, taking a large chunk of the nuclear production offline, as workers push for a pay hike amid rising tensions between unions and the government over a planned pensions reform.

“Thousands of workers are on strike today,” said Philippe Martinez, chief of the hard-left CGT union as he attended a protest march in Paris along with several thousand people, many of them waving red labour union flags.

“This is a message to the government but also to the Medef,” he added, referring to France’s main employer association.

Thursday’s walkouts came amid a concerted call by some unions for company bosses to raise wages due to high inflation. They followed months of individual strike actions across business sectors including transportation, retail and education.

More than 60% of France’s refining capacity was off line due to strikes and unfulfilled maintenance plans. Strikes also hit TotalEnergies refineries for a third day.

The strike, heeded by roughly a fifth of the workforce, reduced nuclear power generation by 3.5 gigawatts (GW) by 1245 GMT and by 470 megawatts (MW) at hydropower stations – an overall 9% reduction in production capacity, according to utility EDF.

The CGT-led national labour mobilisation, also followed by a minority of teachers and railroad workers, had been planned long in advance in an effort to boost the labour movement as public life picks up again after the summer break.

But coming amid a cost of living crisis and at a time the government of President Emmanuel Macron is finalising plans on how to push through an increase in the legal retirement age, the protests were also a barometer of potential social unrest.

“We are here for our salaries, but also because of the pensions issue,” said school teacher Marian Talba, 49, who attended the demonstration in Paris. “My husband earns less than I do, and with three children, it’s really very complicated.”

Protest marches were held in many other cities, including Marseilles and Montpellier.

They were held a day after a crucial cabinet meeting in which Macron, who repeatedly stated his intent to reform the pensions system before next summer, decided to draft legislation by Christmas after new talks with parties and unions.

Macron, who lacks an absolute majority in the National Assembly, also hinted at the possibility of holding snap elections if his reform is blocked, according to participants of the meeting.

“If they don’t listen to us, we won’t stay at the negotiation table,” union leader Martinez said with respect to the reform plans.

The more moderate CFDT union has shunned the strike call, but its boss Laurent Berger has also promised street protests later this year if the government goes too far and too fast on pension reforms.

Asked about the relatively small size of the street protests when compared to previous action against Macron’s social reform agenda, Martinez said: “The mobilisation needs to continue and to amplify.”

French CGT labour union workers walk on the Promenade des Anglais during a demonstration as part of a nationwide day of strike and protests to push for government measures to address inflation, workers’ rights and pension reforms, in Nice, September 29, 2022. The banner reads “Raise wages, it is urgent, possible and necessary”. REUTERS/Eric Gaillard