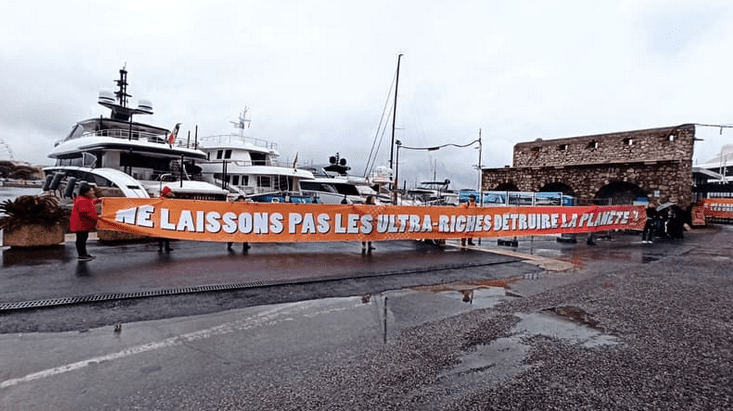 Climate activists from Attac targeted the famous billionaires’ quay in Antibes on Saturday in protest at the ultra-rich destroying the planet, according to their message.

“Don’t let the ultra-rich destroy the planet” was the slogan in a banner unfurled against a background of moored yachts. The protest took place in heavy rain and lasted about an hour. Police officers arrived to identify the protesters, but there were no arrests and the event was entirely peaceful.

Raphaël Radeau, a spokesman for Attac, said that according to data from the “Yacht CO2 Tracker” one of the ships moored at the billionaires’ wharf – Al Raya, owned by the royal family of Bahrain – used some 110,000 litres of fuel for a cruise from August 27 to September 8, amounting to 280 tonnes of CO2. “This corresponds to 28 years of emissions for an average Frenchman and we are told to pee in the shower and everything will be fine”, Mr Pradeau said.

On Friday a demonstration by Attac activists against private jets at Le Bourget resulted in twelve of its activists being arrested.