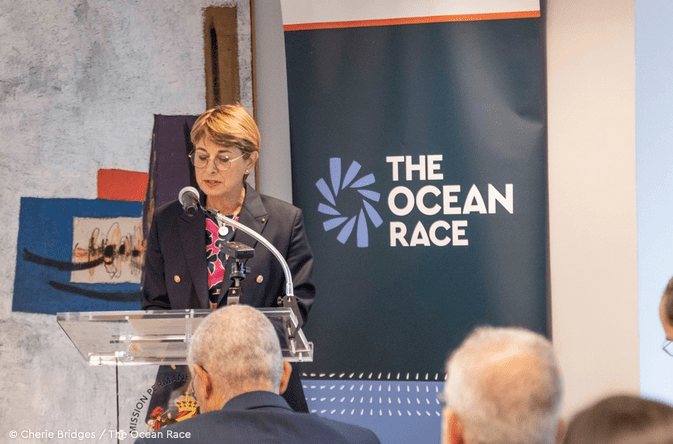 The Ocean Race hosted a high-level event in New York last week to boost support for the adoption of a Universal Declaration of Ocean Rights by 2030, with ministers from Cabo Verde and Monaco and HSH Prince Albert II of Monaco giving their support to the initiative.

The Ocean Race, the round-the-world sailing event known as the toughest test of a team in sport, and partners – including the Government of Cabo Verde, the Government of Monaco and Earth Law Center – are redoubling efforts to give the ocean a voice and gathering increasing support from countries around the globe for the adoption of a Universal Declaration of Ocean Rights by 2030.

Together, the collaborators hosted an event at the sidelines of the United Nations General Assembly in New York that brought together participants from over 20 countries and international organisations to discuss how to galvanise further support as part of the journey towards the adoption of a Universal Declaration of Ocean Rights. Participating countries included Italy, Portugal, France, Sweden, Singapore, Spain, Mexico, Palau, Colombia, Seychelles and Panama, along with key institutions in ocean conservation such as the Pew Charitable Trust.

Cabo Verde’s Minister of Foreign Affairs, Cooperation and Regional Integration, Rui Alberto de Figueiredo Soares, said: “Cabo Verde stands ready to advocate for a Universal Declaration of Ocean Rights that has to be adopted and implemented on a global scale and with the support of policy makers, private sector, scientists, sailors and other key stakeholders. By 2030 the Declaration should establish a set of rules regarding the protection of the oceans and applicable to all countries in the world. The goal is ambitious but achievable as long as there’s global collaboration at heart.”

Cabo Verde will be a Race stopover for the first time during the next edition of The Ocean Race. It will also be the host of The Ocean Race Summit Mindelo, which is part of a series of high-level events to raise awareness and advance support towards Ocean Rights.

Minister of Foreign Affairs and Cooperation of Monaco, Isabelle Berro-Amadeï said: “The ocean is vital for our climate, for our biodiversity and for life on Earth as we know it. It is time we gave the ocean a voice. Two of the most prominent priorities of the Principality of Monaco are oceans and sport. We are proud of the fact that our Sovereign, HSH Prince Albert II of Monaco – who also attended the event – is both an Olympian and one of the most dedicated leaders for a healthy, productive and protected ocean.”

In a video message, Boris Herrmann, one of the world’s best known offshore sailors and Team Malizia skipper, said: “Without the ocean, nothing would be possible. We clearly support The Ocean Race and partners in their work towards a Universal Declaration of Ocean Rights because the ocean means everything to us: it is our playground, our workplace and, for me personally, spending more than 100 days a year in the ocean, it is also my home.”

Team Malizia are champions for sustainability and climate action and will participate in the next edition of The Ocean Race, which starts in January 2023 with their new newly built race yacht Malizia – Seaexplorer IMOCA.

Participation and engagement at leading conferences is an important part of The Ocean Race’s multi-award winning ‘Racing with Purpose’ sustainability programme, which brings together a range of tangible ways that we can have a positive impact on the marine environment. Working with 11th Hour Racing – the Founding Partner of the Racing with Purpose programme and a Premier Partner of The Ocean Race, The Ocean Race is holding high-level summits to drive global decision-makers to create policies to protect and govern the ocean, contributing vital data about the state of the seas to leading scientific organisations, equipping children with the knowledge to help the ocean and much more.