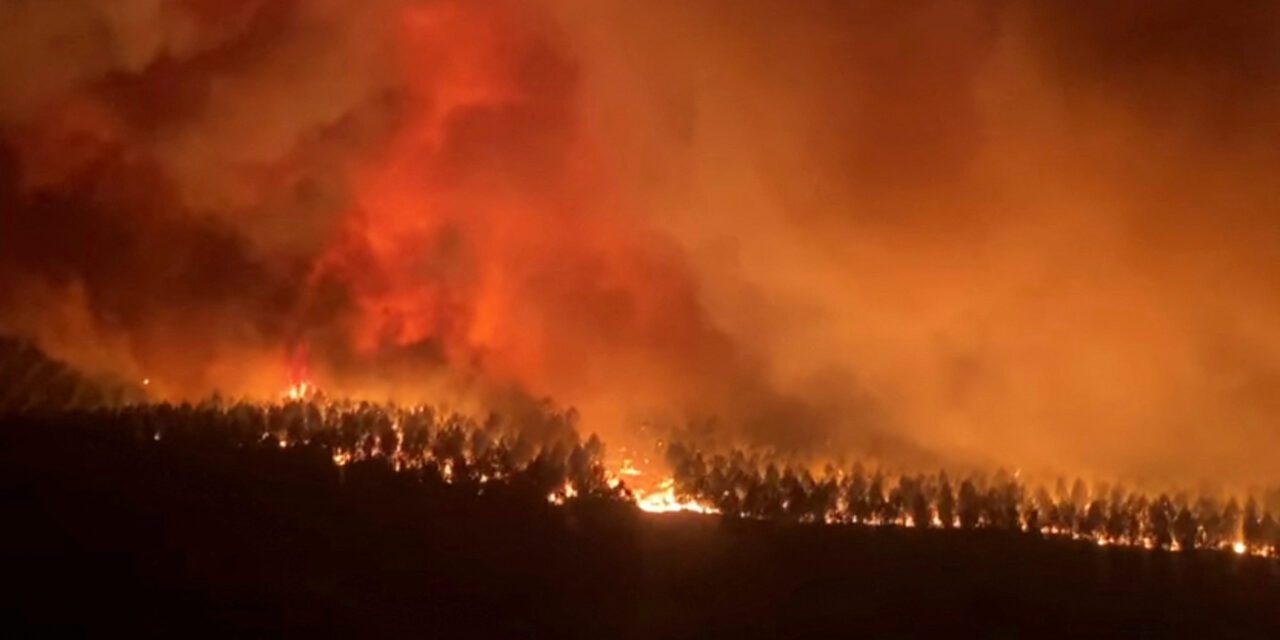 By Stephane Mahe and Layli Foroudi

HOSTENS, France (Reuters) – Wildfires tore through the Gironde region of southwestern France on Wednesday, destroying homes and forcing the evacuation of more than 10,000 residents.

Skies darkened from the smoke billowing from forests destroyed by fires that have razed more than 6,000 hectares (14,826 acres) and were continuing to burn out of control despite the efforts of firefighters backed by water-bombing aircraft.

France, like the rest of Europe, has been struggling this summer with successive heatwaves and its worst drought on record. Dozens of wildfires are ablaze across the country, including at least eight major ones.

“Prepare your papers, the animals you can take with you, some belongings and WAIT FOR THE INVITATION TO LEAVE which will be notified to you by the gendarmerie, officials or volunteers going door-to-door,” the Gironde municipality of Belin-Beliet said on Facebook after authorities decided to evacuate part of the town.

In the nearby village of Hostens, police had earlier been door to door telling residents to leave as the fire advanced. Camille Delay fled with her partner and her son, grabbing their two cats, chickens and house insurance papers before taking flight.

“Everyone in the village climbed onto their rooftops to see what was happening – within ten minutes a little twist of smoke became enormous,” the 30-year-old told Reuters by telephone.

Firefighters said more evacuations were likely. Even so, some Hostens residents were reluctant to abandon their homes.

“It’s complicated to go with the dogs and we cannot leave them here,” said Allisson Horan, 18, who stayed behind with her father.

“I’m getting worried because the fire is in a plot of land behind ours and the wind is starting to change direction.”

Numerous small roads, and parts of a highway, were closed.

He repeated calls for everyone to be responsible – nine out of 10 fires are either voluntarily or involuntarily caused by people, he said.

The Gironde wildfire is one of many that have broken out across Europe this summer, triggered by heatwaves that have baked the continent and brought record temperatures to some places.

In Portugal, nearly 1,200 firefighters backed by eight aircraft have battled a blaze in the mountainous Covilha area some 280 km (174 miles) northeast of Lisbon that has burned more than 3,000 hectares of forest since Saturday.

Spain and Greece have also had to tackle multiple fires over the past few weeks.

The Gironde was hit by major wildfires in July which destroyed more than 20,000 hectares of forest and temporarily forced almost 40,000 people from their homes.

Authorities believe the latest inferno was a result of the previous fires still smouldering in the area’s peaty soil.

Fires were also raging in the southern departments of Lozere and Aveyron. In the Maine et Loire department in western France, more than 1,200 hectares have been scorched by another fire.

Flames engulf trees during a fire in Hostens, as wildfires continue to spread in the Gironde region of southwestern France, in this screen grab taken from a handout video August 9, 2022. Sdis33 via Facebook/ Handout via REUTERS