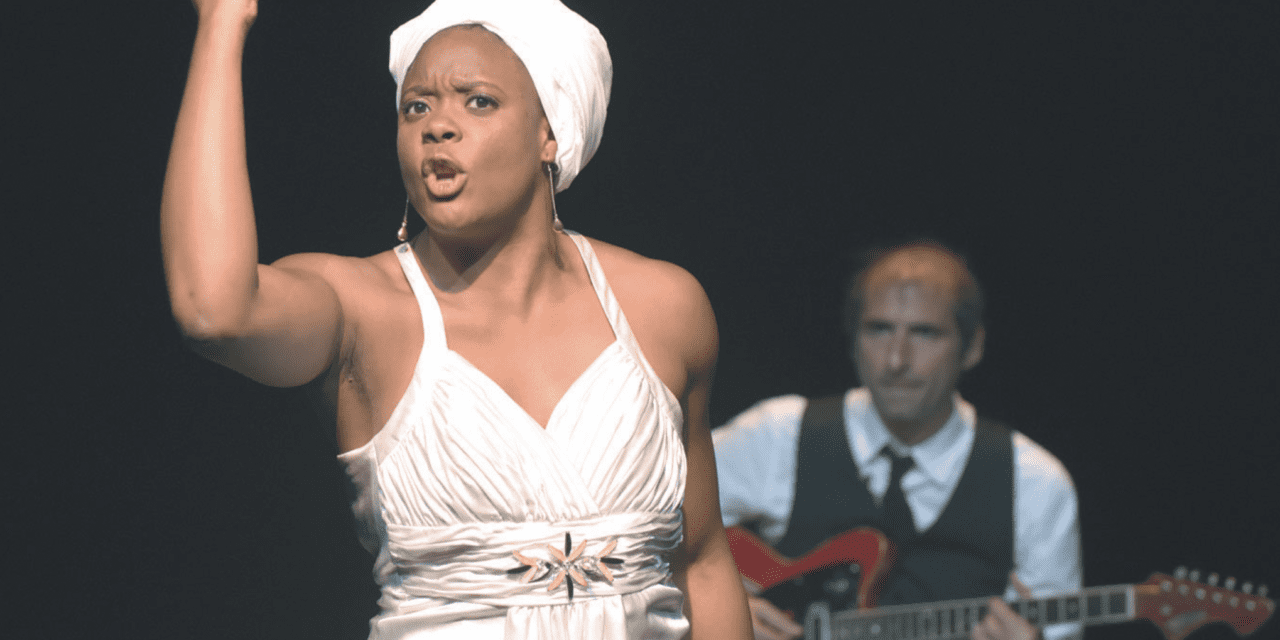 A theatre performance in French, Pueblo is the third adaptation of a text by Ascanio Celestini by actor David Murgia. Accompanied by the musician Philippe Orivel.

It is the story of a tramp who does not beg and an eight-year-old gypsy who smokes, the story of a barkeeper who earns her living with slot machines, of an African and a handful of other people whose names are not known. This is the story of a rainy day. Their links? This small town all that is more common. But also the relationships between all the people who inhabit it… People who are beautiful in their simplicity, endearing, generous, flamboyant, who continually expect something prodigious from life. With irony and impertinence, humor and tenderness. A powerful and moving summary of humanity.

Free entry to all public – from 12 years old.

After scouring festivals and stages in France, this stunning quartet arranged by Alfio Origlio and performed by rising Soul star, Celia Kameni, offers us a recomposition of pop and soul songs with songs by Grégory Porter, Stevie Wonder, U2, Seal and the indolent Blues of Jeanne Moreau. The singer Célia Kameni takes us into her universe and gives us both to hear and to see with interpretations of exceptional musicality accompanied by the no less remarkable Brice Berrerd (double bass) and Zaza Desiderio (drums).

Participation of 10€ per person the evening of the concert.

Portrait of Ludmilla as Nina Simone

In this original creation by David Lescot, Ludmilla Dabo brings to life for us the great Nina Simone, legend of the blues and emblematic figure of Afro-American culture, engaged in the fight for civil rights in the United States.

On stage, it is Ludmilla Dabo who slips into the skin of the famous singer. Accompanied on the guitar by author and director David Lescot, the actress gives body and voice to an interview-portrait with virtuosity and generosity, going through the major events in Nina Simone’s destiny and shedding light on aspects of her own life. She makes us laugh, moves us and her beautiful voice makes us travel. A vibrant tribute to one of the greatest artists of the second half of the 20th century, Portrait of Ludmilla as Nina Simone brings to life the soul of an extraordinary woman.

Performance is in French. Freen entry, Friday 22 July 2022, at 21:30 pm at Fort Antoine Theatre, organised by the Department of Cultural Affairs.

Very popular in Scandinavia, Queen Machine Symphonic is hailed as one of the best tribute bands in Europe. It presents the universe of Queen in an authentic tribute show.

The leader of the group is Bjarke Baisner, resembling the young Freddie Mercury. He is joined by Peter Møller Jeppesen on guitar, Henrik Østergaard on keyboard, Jens Lunde on bass and Paolo Romano Torquati on drums.

They will be accompanied on stage by the London Symphonic Rock Orchestra, which only includes musicians from classical formations.

On the occasion of the Fight Aids Monaco evening, Queen Machine Symphonic will rock you for the first time on the stage of the Salle des Étoiles to support this important cause. It’s a dinner show, on Saturday, July 23 at 20:00, the concert starts at 22:30.