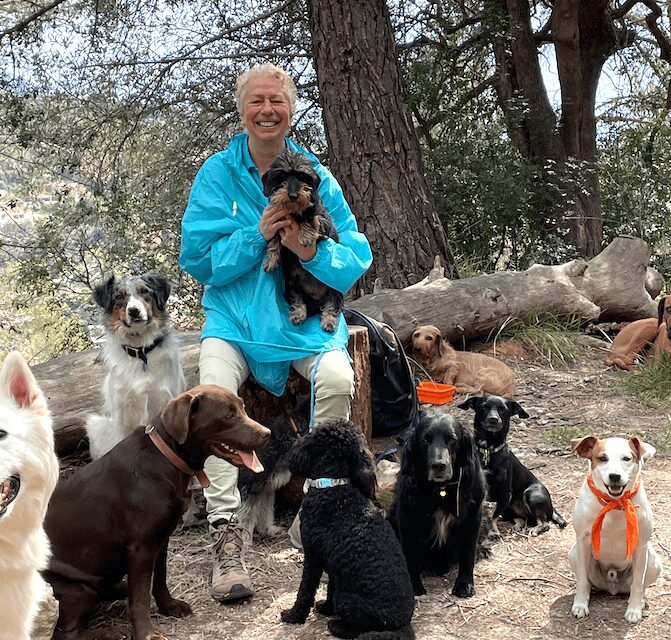 Dog psychologist Karen September could work 24/7 all year round. She needs to be strict with herself and allow “a me” time so she can face the number of clients desperate for her help. For the past six years her business in Monaco has grown from strength to strength by word of mouth only.

“Dog psychology is different from dog training. Dog psychology helps people to understand why their dog is behaving like it is and try to correct it – it’s usually, for instance, separation anxiety. Dog reactivity is not a problem, the problem is behind that. Dogs have sometimes been given a leadership position they can’t manage and animals are animals. If they are in the human world they need firm and consistent guidance. Dogs love that, they served us for 20,000 years – now we serve them and they are unhappy, so I called my business Happy Dog and I firmly believe dogs can be happy in the human world if we respect their animal side and not try to humanise them.”

“If the dog is well balanced, that means it is happy and you can take it anywhere”, says Karen over a cup of coffee at Casa del Cafe where we met briefly one February afternoon, watching the dogs and their owners passing by. “But if the dog has problems, it gets left at home and it is a shame because it is not the dog’s fault,  99 percent of the time it is the owner’s fault.”

“It is about putting some structure and boundaries. I had a client whose dog could go everywhere, the couch, the kitchen counter. Well if you take that dog out, the inside behaviour manifests in the outside world as well and it looks like the dog has aggression but it is not – it is actually anxiety because the dog has no structure. Little boundaries in the house help the dog’s behaviour everywhere.”

“My dogs are not allowed in the kitchen…they do come on the couch with me but only by invitation. I love my dogs in bed with me, it’s great, we cuddle up but they wait at the bedroom door until I invite them in and if I don’t invite them they go away. So it’s not constantly changing, it’s consistent.”

Karen now owns three dogs and two cats. She is an Australian who grew up surrounded by horses and dogs. She used to breed English Bull terriers. She eventually left Australia to visit her British father. A six-week holiday stretched to a full 15 years, initially working as an intensive care nurse and later accepting a job working on film sets as a medic for stunts.

It was while working in London that she got a private intensive care job in Monaco. That was in 2007. She has always looked after dogs, as well, and followed the latest developments in dogs psychology.  She has acquired several diplomas in canine behaviour, trained closely with Cesar Millan, the world-renowned dog behaviourist in the USA, and kept her eye on new and interesting techniques to help dogs to be balanced and happy and owners to be good P.A.C.C. (Patient, Calm, Assertive and Consistent) leaders.

She says she has a special love for dogs. Her dream would be to develop a dog psychology centre with an agility park.

Every morning apart from the weekend – me time, this is a must – she organises structured pack walks for dogs in the area. Karen also runs her non-profit organisation called APAW – animal psychology and well-being. She works with refuge centres or private clients who wish to rehome their dogs. A fully trained puppy or a dog is then offered for adoption.

“I do a lot of puppy boarding and training – I’d have a puppy in my home for a period of time when I crate train them and master their walks on the leash, and all the obedience like sitting down etc. I teach them tricks…”

She is also starting a company for organic dog and cat food, supplying her own clients only at the moment…

Karen jokingly mentions a recent survey done in the UK: “Would you rather give up your dog or your husband?” Apparently 80 percent of the women said they would rather give up their husband.

“Dogs need to be loved but they need more than that to be happy. My goal is to help people understand that a dog that is reactive to another dog or can’t socialise is not a happy dog and is not reaching its full potential – it is kind of stuck in a human bubble. It is all about humans wanting this kind of affection and adoration from the dog but it has to be a two-way thing, it has to be about respect for the dog.”

“Many people call me strict, which I am but I am consistent. When the dog earns your affection they appreciate it more.”

A golf and skiing enthusiast, Karen says she will eventually retire in Australia. “I live 40 mins from Perth. I never really like to make the timeline because you never know what’s around the corner, things change very quickly. I kind of have a plan but it’s always movable. I will know when it’s time to go home.”

But for now “I would like to go on improving my own skills and helping more people with their dogs. I am happy here in Monaco. I have a lot of really good clients, my life is a dream.”