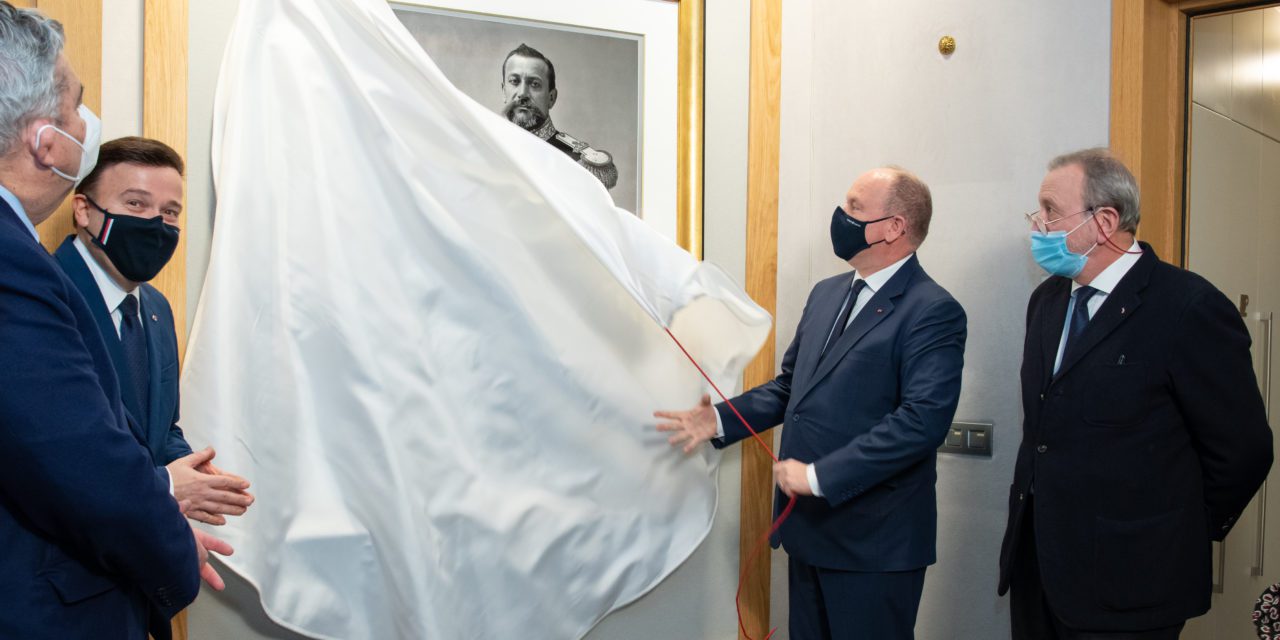 As one in a series of important events to mark the centenary of the death of Prince Albert 1, HSH Prince Albert II on Tuesday unveiled a portrait of his famous forebear in the library of the National Council.

The unveiling followed a special assembly of the elected body, with many leading personalities of the Principality also present.

President of the National Council Stephane Valéri introduced proceedings by reaffirming the elected body’s attachment to the Prince and his family.

Mr Valéri continued by outlining some of the many extraordinary achievements of the explorer Prince. Well-known for his founding of the Oceanographic Museum and Institute, Albert 1 also initiated the hospital and the lycée, abolished income tax, and perhaps most important of all, he oversaw the transformation from an absolute monarchy to a constitutional monarchy.

In response, HSH Prince Albert referred to Albert 1 as, in some ways, a common ancestor for the Princely family and the National Council.

Prince Albert 1 initiated the foundation of the elected body in January 1911. He went on to say that the equilibrium between the National Council and the authority of the Prince provides the equilibrium that guarantees the stability of the Principality. He also noted that his great-great-grandfather had waited 22 years before overseeing the birth of the council.

The Sovereign noted that a National Assembly had been founded in February 1848, the year of Prince Albert 1’s birth, but never saw the light of day because Menton and Roquebrune seceded within days to become part of modern France. On March 2, the country shrank from 25 square kilometres to 1.5, and from 6,000 inhabitants to 1,200.

Prince Albert completed his thanks to the Council by saying: “Because yesterday’s questions often overlap with today’s challenges and those of tomorrow, let us invigorate ceaselessly, the heritage of Prince Albert I, based on the requirements of the rule of law and continuous adaptation to changes in the world around us.”

The third speaker was Professor Dominique Chagnollaud, President of the Circle of Constitutionalists and Professor at l’Université Panthéon-Assas of Paris, who spoke of the new Constitution promulgated by Prince Rainier III, on December 17, 1962. This brought in universal suffrage for women in all elections and an increased role for the National Council. This was followed by a constitutional revision in April 2002, made necessary by the Principality’s membership of the Council of Europe.

The Prince remains since 1911, the unique constitutional foundation of the three powers: executive, legislative and judicial, of which the Constitution has guaranteed separation, Professor Chagnollaud said.

“We owe this heritage to Your ancestor, Albert 1.”