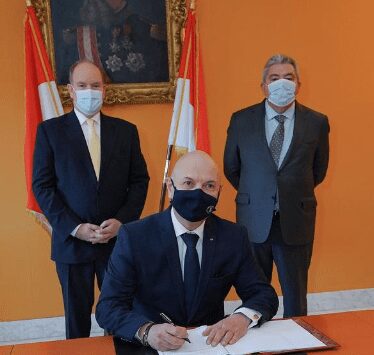 The Principality of Monaco’s admission to the TV5 network was made official as Mr Laurent Anselmi, Minister of Foreign Affairs and Cooperation, last week signed the TV5 Charter, the founding treaty between operators TV5 Monde and TV5 Québec Canada, and an agreement setting out the practical arrangements for the country’s admission.

HSH Prince Albert, HE the Minister of State, officials from the French Ministry of Culture and Ministry for Europe and Foreign Affairs, and executives from TV5 Monde all attended the signing ceremony. This makes the Principality of Monaco the sixth government to contribute to funding TV5, alongside Canada, the French Community of Belgium, France, Quebec and Switzerland.

Monaco’s admission to the network was one of the priorities in TV5 Monde’s strategic plan 2021–2024, which was approved in late 2020. The Monegasque Government will now be involved in the annual ministerial conference, which is charged with setting out the strategy for the network and determining the budgetary contributions to be paid by each partner government. The newly created Monegasque public broadcaster Monte-Carlo Riviera will soon become a shareholder in TV5 Monde and will sit on its board of directors.

More than 30 years after the Canadian and Quebecois governments joined the network in 1986, all of the partner governments celebrated this latest expansion of TV5 Monde’s governing bodies, which is a significant step in the history of the Francophone network in service of its goal to fully represent the pluralism and diversity of the French-speaking world, the Monaco Government said in a press release.

Mr Pablo Rodriguez, Minister of Canadian Heritage: “I warmly welcome the Principality of Monaco’s admission to the TV5 partnership. This addition is in line with a diverse and dynamic French-speaking world, giving us more access than ever before to a wider and more varied range of television content. The establishment of the new broadcaster, Monte-Carlo Riviera, will help to expand the Francophone media and cultural space.”

Mr Pierre-Yves Jeholet, President of the French Community of Belgium: “TV5 is a fantastic tool for promoting the television output of the French-speaking world, reaching more than 350 million television viewers in nearly 200 countries. Seeing a new member – the Principality of Monaco – join a network which has stood the test of time and secured its place in the international media landscape can only be a cause for celebration. The country’s admission is further proof of the vitality and attractiveness of TV5.”

Ms Bénédicte Linard, Minister of Culture and Media of the French Community of Belgium: “The new admission of Monaco to TV5 is great news, which I am sure will contribute to promoting the influence of French-speaking countries and our television content, not only between the partners but throughout the world as well. Thank you to all those who have worked to achieve this new stage in the development of TV5, of which Belgium, through RTBF, was one of the founding members in 1984.”

Ms Simonetta Sommaruga, Federal Councillor and Head of the Federal Department of Environment, Transport, Energy and Communications of the Swiss Confederation: “The expansion of TV5 Monde to include the Principality of Monaco is wonderful news. The addition of a new partner will help to better reflect the diversity of the French-speaking world. TV5 programmes are broadcast to 400 million homes. They offer something unique to television viewers all over the world and provide global visibility to Francophone television output.”

Mr Jean-Yves Le Drian, France’s Minister for Europe and Foreign Affairs: “I would like to offer my sincere thanks to the Principality of Monaco, as well as partner governments, the Chair of the Board of Directors, the Executive Director of TV5 Monde and their teams for the work they have done to make this addition happen. It is an important event in the network’s history. Monaco’s admission to the TV5 Monde governing bodies will help to consolidate and enhance the presence of the full diversity of Francophone television content on the international stage.”

Ms Roselyne Bachelot-Narquin, French Minister of Culture: “I am delighted to see the Principality of Monaco admitted to TV5 Monde, and I would like to pay tribute to the work of the network and of the various partner governments, which made this possible. The admission of our Monegasque partner is a wonderful opportunity for the Francophone network, as it will strengthen efforts to promote the French-speaking world and its values around the globe.”

Mr Laurent Anselmi, Minister of Foreign Affairs and Cooperation of the Principality of Monaco: “It is a huge honour and an enormous pleasure for the Principality of Monaco to join the TV5 Monde governing bodies through its new national public television channel, Monte-Carlo Riviera. I would like to thank the French presidency, as well as all of the partners and the leadership at TV5 Monde, who made Monaco’s admission possible. This strategic move shows Monaco’s desire to use an independent media to promote cultural diversity and high-quality information which openly discusses global issues. In joining TV5, Monaco is reaffirming its support for Francophone activities, and its commitment to spreading the influence of the French language throughout the world.”

Ms Nathalie Roy, Quebec Minister of Culture and Communications: “Our government welcomes the addition of the Principality of Monaco to the TV5 family. This admission will enable us to strengthen the expression of Francophone culture throughout the world. I would like to emphasise that, through the quality of its programming, TV5 provides a daily illustration of the dynamic and universal nature of the French-speaking world.”