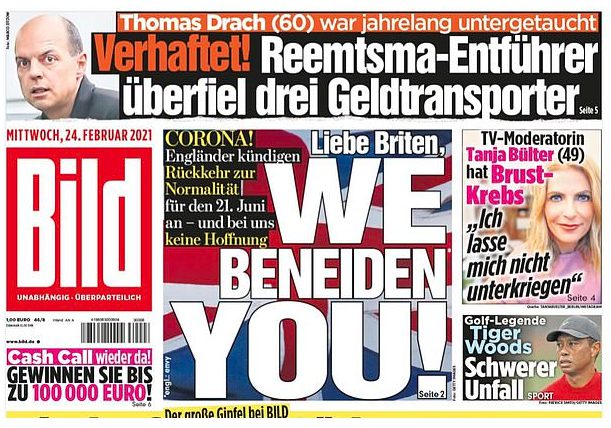 An acute shortage of vaccines in the European Union is pushing several member states towards tougher lockdowns.

Germany appears close to a third lockdown and its government is in disarray as ministers blame the European Commission for vaccines failures. It is unlikely that the health minister, Jens Spahn, can pin all the blame on Brussels and its unlikely he will stay in office much longer. To date, Germany has inoculated just 6.23 percent of its population.

In France, the situation is going downhill fast and the prime minister is due to give a press conference on Thursday at which he is expected to announce “swift and strong” new measures in at least some regions of the country.

France, too, is struggling with its jabbing programme. From Thursday, company doctors will be allowed to immunise workers between the ages of 45 and 60, but only if they have underlying health problems, such as cancer. Each doctor will be allowed to administer 10 doses. France has inoculated 5.49 percent of its population.

In much smaller Slovakia, population 5.5 million, the situation is dire. Too small to source its own vaccine supplies, the country is dependent on the EU and desperate for doses. Around 100 people are dying every day, despite restrictions. Its foreign minister has described the situation as “tragic.”

In the UK, on the other hand, the vaccination campaign has reached 27.1 percent of the population and the rollout is so swift there has been no need to prioritise different groups, except in age terms. All children go back to school on March 8, other relaxations follow every few weeks and by June life should be back to more or less normal. There have been hiccups. Most noticeably there has been a reluctance amongst ethnic minorities to receive the jab, so whereas in the Southwest of England 97.7 percent of over 70s took up the offer, the figure for London is 80.3 percent.

Germany and France will need until some time in 2023 to immunise their populations, as long as the current lack of progress continues.

PHOTO: The front page of Germany’s most-read newspaper, with the headline “Dear Britain, we envy you”