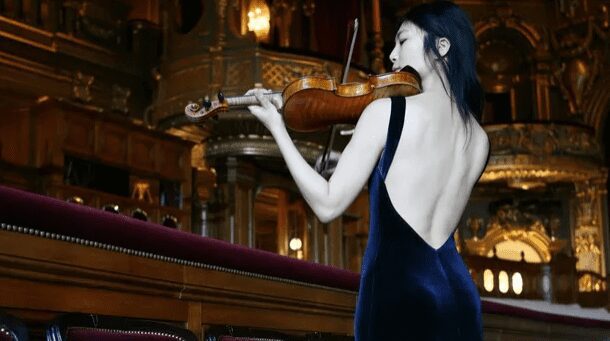 Monaco’s incredibly talented and very popular concert violinist Zhang Zhang has hit out at woke commentators who have claimed that classical music is elitist and in urgent need of more diversity.

The polemic started when Ibrahim Maalouf, a composer and trumpet player, tweeted a complaint about “the lack of diversity in the famous Vienna Philharmonic.”

Mr Malouf’s stance was backed by Mme Aliette de Laleu, a journalist at France Musique, who said on the France 5 TV channel that classical music was systematically sexist and racist.

Using the columns of Le Figaro to make her point, Zhang Zhang said that classical music is an integral part of European culture and should be admired for that. As a treasured member of the Monte-Carlo Philharmonic Orchestra, she added that in recent years Europe’s top orchestras have increasingly brought women to the fore.

In Monaco, the Philharmonic of 88 members represents 17 nations and the conductor is Japanese. There are 30 women and 58 men, and among the 39 musicians recruited since 2000 – when Zhang Zhang joined – 23 are women and 11 are soloists, she said.

Zhang Zhang added that the complaints about diversity in classical music are as absurd as claiming that the PSG football team is Sinophobic because there are no Asian players in the team.

In addition to being a top soloist for the Monte-Carlo Philharmonic Orchestra, Zhang Zhang founded a charitable association, ZhangomusicQ, whose concert receipts go to deserving causes.

BIOGRAPHICAL NOTE: Zhang Zhang was born in China during Mao’s Cultural Revolution, emigrated to Thailand at the age of 10 before moving to Canada. She trained as a musician in the US and Switzerland. PHOTO: Playing at the Opera in Monte-Carlo Zhang Zhang