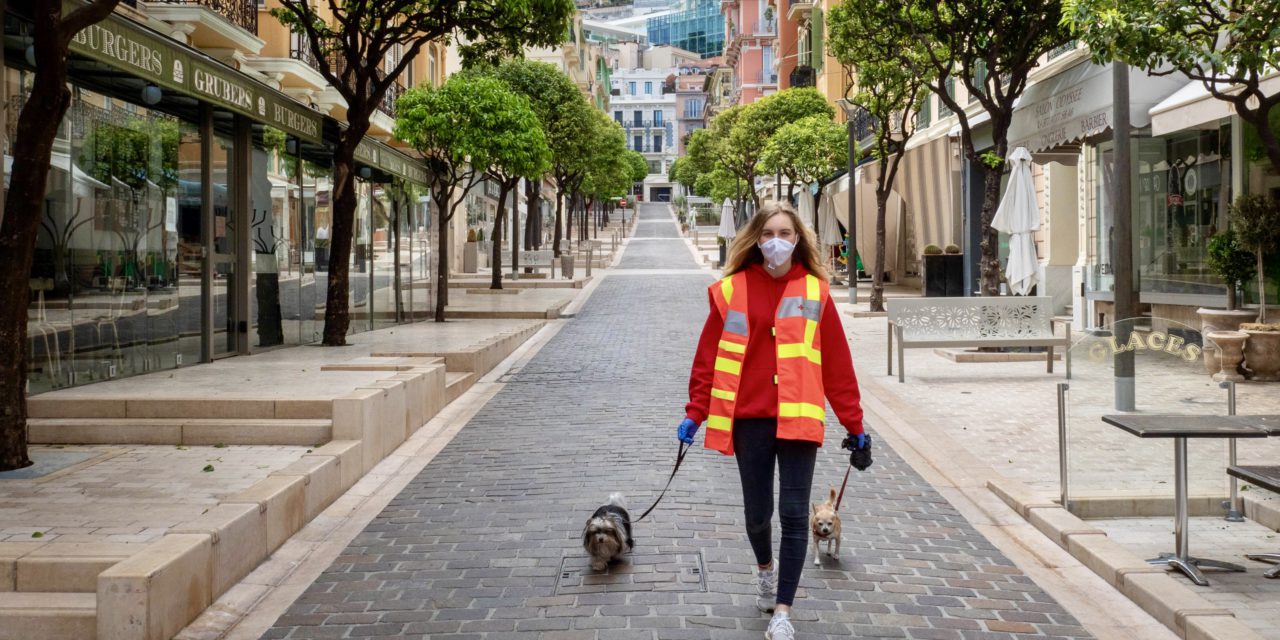 Since the beginning of the health crisis linked to Covid-19, nursing staff have been put to the test. The National Association of Nurses of Monaco (ANIM), under the aegis of the Monaco Red Cross, wanted to produce a photo-essay to bear witness to the work of Monaco’s nurses on the front line, facing the coronavirus pandemic during this « International Year of Nurses ». The Monaco Red Cross wanted this report to also bear witness to the commitment of other Monegasque institutions treating the Covid-19 crisis.

Even if fear and anxiety are often present while facing the dangers linked to the coronavirus, all these workers, volunteers or salaried employees have shown exemplary courage and dedication.

Denis has been a volunteer with the Monaco Red Cross for two and a half years, and was part of the logistics teams for home deliveries. He is seen here with 99-year-old Odile. “This visit represents one day less quarantined alone,” she says. “Without the visits of the Red Cross volunteers, we would die,” says one of the elderly ladies to Gilles, also a logistics volunteer with the Monaco Red Cross. Often the only social link with the people he visits, Denis remains a little more at Odile’s side. “There’s a bond that’s being created : I’ve repaired her walker, I throw out the rubbish, I bring the mail, the newspaper… You have to motivate the people you meet, boost them.”

Aziz, father of two, and employee at the Monaco Sanitation Company, saw how people changed their habits, “There’s more dirt. There are gloves and masks on the floor. People are afraid to go near or touch the dustbins.” He hopes the situation will change, but considers himself lucky, “We have to work! In the Comoros, where I come from, workers are less well protected,” he confides. His colleague, Ludovic, adds: “We were looking at the pictures from China, and we didn’t think it was going to happen so quickly, or to such an extent.”

Student volunteers have never been more committed than during the health crisis. Gwendal and Julien are both 19 years old, “I’ve been mobilised since the 20th March, Julien since the beginning of April. As long as there’s a request, we will be there… I’ve been a volunteer at the Monaco Red Cross for the past 4 years, so that I can give time to the elderly. Exchanging with them, bringing companionship to the most fragile people is a great help in these difficult times. Julien, his colleague, confirms, “Being mobilised during the health crisis is a risk you have to take.”

Based at the Rainier III Auditorium, the Call-center was opened in March by the Monaco Government. Its objective: to provide assistance to the general public; answer requests for information on Covid-19, whether logistical, medical, psychological or simply to help people in distress. It is nerve center for the treatment of the health crisis, which allows several professions to work with one voice.

Virginie is a childcare nurse. During the lockdown, she was in charge of the Monaco-Ville kindergarten, which remained open for children whose parents were medical or paramedical staff, or had to provide essential services. “We all appreciated being very well supported by our hierarchy. The parents were not so worried, and the children adapted well. The most difficult thing was to reassure the staff, but the health protocol in place left no room for risk.”

The Monaco Red Cross deployed its volunteers on all fronts to make life easier for those most affected by the lockdown. The volunteers carried out more than 460 dog walks for the most vulnerable and isolated or those confined to their homes. “Providing this service to the most vulnerable people gives a special feeling,” says one of the volunteer dog-walkers. “We create a bond: a bond of trust, a bond of solidarity. One always has to help those in need, to be of service to them, especially for what you have received in the past. This simple gesture is a way of saying thank you.”

Bettina, a Monegasque knitwear company, reacted very quickly to the new necessities by transforming its workshops to make masks. Roseria, who works in garment making, is aware of the importance of her task, “This work is very important for everyone and for me, too.” The company gave 200 masks to the Monaco Red Cross, to ensure that its employees could work safely.

“Our work has evolved since the beginning of the health crisis. We are taking part in the fight against the spread of the virus in the Principality, by ensuring compliance with barrier actions. Overall, the lockdown is well respected. We are dealing with disciplined people who approve of the police’s authority. Foreigners in particular come here for peace and security. Our work is different from other countries: we are particularly close to the population, to help people, to do prevention, for the good of all,” says Lieutenant Letizia Alessandri.

At the Monaco Post Office, work continued during the lockdown. Fewer envelopes, but definitely more parcels. “We had to organise ourselves, for example by developing an application so that we no longer needed a signature when the parcels were handed over. We simply ring people’s doorbell and ask them if they accept the package” says Sandro, busy sorting mail in this photograph (third from right). “Working at La Poste, at the moment, is a risk. Older people, especially, are looking for any kind of contact, and we can’t say no… So we respect the protocol and we keep our distance!”

Stéphane and Yannick are two paramedics mobilised during the health crisis, “The pandemic gives us a renewed interest in our work. We are deployed in a more useful way than when we just transport people from their home to the physiotherapist… Families are worried and must be able to trust us. The cleaning of the ambulances, for example, has been reinforced: they are now cleaned after every patient, and more thoroughly.”

Magali, a SNCF agent at the Monaco station: “Since the start of the lockdown, there are only 9 passenger trains and 2 freight trains a day, instead of a hundred. Usually at rush hour, you can’t see the platform for people. Today, only about fifty people continue to travel. We all pay close attention to respect the barrier actions, for us as well as for the passengers. I don’t come across anyone, except my colleague who is on the next shift. But I am lucky to get out of my home to come to work. My friends can no longer work and are experiencing financial difficulties.”

Since 19 May 2020, the Monaco Red Cross has supported and assisted the Monégasque Government’s campaign to screen the entire population for Covid-19. The aim was to, ‘test as many people as possible’ in order to draw up a precise picture of the extent of the virus. The Red Cross was partly responsible for training all the testers. Here, the Monaco Red Cross teams test members of the Ballets de Monte-Carlo. All the staff and dancers were tested on site, so that the company could resume practicing in the studio.

Three Monaco firefighters are deployed to assist a 17 year old boy who is suspected of being laid low with Covid-19. “At the peak of the crisis, two ambulances and duly-equipped personnel were set aside by the Fire Brigade for transporting suspected coronavirus cases. By the end of January, during the first peak of the epidemic in China, we were prepared with the objective of protecting ourselves as much as possible to prevent the virus from entering the barracks, where our families also live. Our organisation, as well as the vigilance and consideration of our staff and families by the managers, enabled us to fulfill our public service remit,” says Captain Vincent.

“I thought we were going to be very well protected, but I realised straight away that there was a risk of contamination. Whilst we had equipment and time to prepare in Monaco, at the hospital in Mulhouse, where we volunteered to relieve the teams, it was more complicated,” says Caroline, a CHPG nurse. “We were incredibly moved by the welcome and kindness of the local staff, even though they had been through so much,” adds Nikolas (left in the photo), an auxiliary nurse who also works at CHPG. “They had dozens of patients who needed to be intubated. They had to make choices because of a lack of ventilators.”