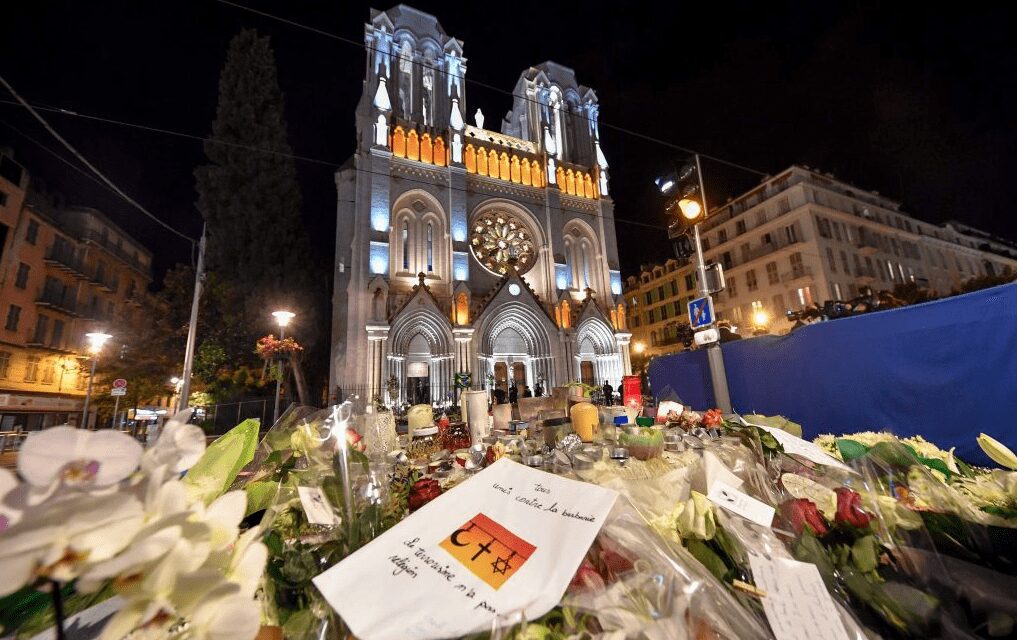 French bishops conducted a “penitential rite of reparation” inside a church in which three people were murdered last Thursday.

The Nov. 1 Mass of reparation was celebrated in Notre Dame Basilica by Nice Bishop André Marceau, who was joined by Archbishop Jean-Marc Aveline of Marseille and Archbishop Dominique-Marie David of Monaco.

The church was the scene of an Oct. 29 attack in which a man hacked three people to death with a foot-long blade before he was shot 14 times by the police.

The penitential rite was necessary to purify the church from the stain of a “gravely injurious act ” before normal religious activities could resume, according to a Nov. 1 statement on the website of the Diocese of Nice.

Amid maximum security, the bishops, joined by priests of the diocese, wore penitential purple for the evening event, which began when the church, with its altar stripped and bare, was plunged into darkness.

The church was blessed throughout with holy water before the lights were turned on again, and the bishops changed their vestments to white to signify the Resurrection.

Restrictions in place to stop the spread of COVID-19 meant that only a small number of guests, including Mayor Christian Estrosi, were invited to the liturgy, though a crowd of people gathered outside.

According to Le Parisien, Bishop Marceau condemned the violence that had desecrated the basilica.

“The stones cannot cry out their horror,” he said. “The abomination of the terrorist act marred the destination and vocation of this place.

“He dared barbarity … three lives were stolen in the name of a false god,” said the bishop.

Photographs of the three victims of the attack were displayed in the church, and the faithful were encouraged to light candles for them.

Vincent Loquès, 55, the sacristan, died inside the church along with Nadine Devillers, 60, while Brazilian-born Simone Barreto Silva, 44, fled after she was stabbed but died in a nearby cafe. Her last words were reported to be, “Tell my children I love them.”

Brahim Aoussaoui, 21, who had entered France after arriving on a migrant boat to Italy in September, was arrested at the scene. He is in a critical condition in hospital from gunshot wounds.

Five others, ages 25-63, have since been arrested in Nice and nearby Grasse in connection with the killings.

They are suspected of assisting Aoussaoui after he was dispatched to France to carry out the attack, according to the Journal du Dimanche newspaper.

French authorities have said they believe the killings were an act of Islamist terrorism, which came amid mounting anger at President Emmanuel Macron’s defence of satirical cartoons of Muhammad, the founder of Islam.

On the same day of the attack, police shot dead a man who was brandishing a handgun and shouting “Allahu akbar” in the southern city of Avignon.

On Oct. 31, Greek Orthodox Father Nikolas Kakavelakis, 45, was shot twice by an unknown attacker as he locked up his church in the French city of Lyon; he is said to be in a critical condition.

The French Council of Muslim Worship condemned the Nice attack and asked Muslims to cancel Oct. 29 celebrations of the birth of Muhammad in solidarity with the victims and their families.

Tributes to the dead are seen outside of Notre Dame Basilica in Nice, France, Nov. 1, 2020, as French bishops conduct a “penitential rite of reparation,” following the Oct. 29 deadly attack at church. The penitential rite was deemed necessary to purify the church from the stain of the homicide before normal religious activities could resume in the basilica. (Credit: CNS photo/Lionel Urman, Panoramic via Reuters.)