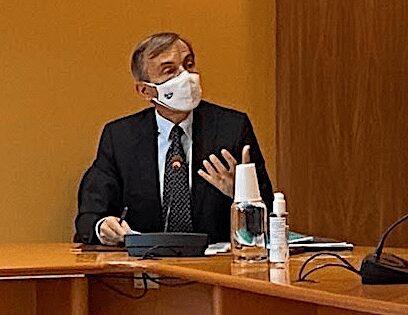 IMSEE, Monaco’s statistical office, has published figures for the second quarter of this year that unsurprisingly show that certain parts of Monaco’s economy suffered serious difficulties. The worst-hit was the restaurant and hotel sector, with a fall in turnover of 36.4 percent in the whole of the second quarter. The fall from mid-March to the end of April was 41 percent, compared to the same period of 2019.

In contrast, construction and finance were very resilient, with falls in turnover of one percent and 0.5 percent. Overall, economic output in the second quarter was at the same level as in 2016.

Minister of Health and Social Affairs told the press conference at the Ministry of State that the Government’s priority is employment. “What is important is to save jobs,” he said.

Jean Castellini, Minister of Finance, added that in terms of figures, Monaco’s position is similar to that in France, with an expected drop in GDP of about nine percent for 2020. He added that as well as the evolution of the health situation, Monaco’s economy was also susceptible to macro-economic factors, including the US presidential election and Brexit.

There are some bright spots. VAT receipts were better than expected in July and August. Over the next few months the Monegasque state will continue its support for the economy, giving priority to the worst-affected sectors, Mr Castellini said. The temporary reduction in employers’ social security contributions will be extended he said. The Government will continue to play the role of facilitator as the economy recovers.