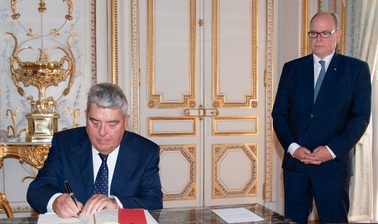 The one-to-one meeting lasted two hours as the Head of Government and the President of the Assembly got down to brass tacks, in a friendly and constructive atmosphere, the National Council said.

Stéphane Valeri said: “This meeting took place in a particular international context. It was necessary to immediately get to the heart of the matter. Our working relationship must be efficient and operational without delay.”

Discussions focused on the main issues at the heart of the concerns of Monegasques and residents, and in particular the health crisis and its economic and social consequences, the national housing plan and the preservation of the quality of life.

The two men met the committee chairmen of the National Council, with each one presenting the main topics under consideration in their respective areas.