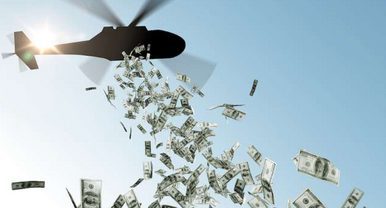 In just five trading days European stocks have wiped out 10 months of rises and US stocks entered a technical correction (a decline of more than 10 percent). Markets go down a lot quicker than they go up. Whilst Donald Trump at one point blamed the Democrats’ debate in South Carolina for the falling stock market, most sane people know that the damage to the world’s supply chains, travel industry and consumer spending is the main concern.

Companies around the world have been announcing profit warnings as a result of the disruption. Hopefully the epidemic will be temporary but it looks as though the hoped-for economic rebound is not coming anytime soon and, as we know, the global economy was already on the verge of recession before it hit. Mexico and Hong Kong joined other countries in reporting that GDP contracted in the fourth quarter of 2019, before the coronavirus hit.

But, Hong Kong thinks it has found the solution to our problems. The government will give each citizen HK$10,000 (US$1,283) to spend as they like (see article below), following similar free gifts in Singapore (up to SG$300) and Macau (shopping vouchers worth 3,000 Pataca/US$374). This has been described as ‘helicopter money’ (although it may not be funded by money printing) and is one of the more extreme proposals to deal with the next downturn, which we can assume from these actions is now upon us. The fact that this is not front page news around the world indicates how blasé we are these days about new and untested extreme fiscal and monetary policies. They say there is no such thing as a free lunch but the residents of Hong Kong may disagree as they embark on a government-funded spending spree.

The aim of giving people free spending money is to create instant demand. However, the authorities appear to have ignored the disruption in the global supply chain caused by the virus and they could be creating an adrenaline boost for demand just as the supply of goods shrinks. Watch out for shortages of goods and photos of empty shelves because the big risk is that the price of goods suddenly sky-rockets and that could lead to hyper- inflation, which is devastating. Central banks have complained about a lack of inflation for years but be careful what you wish for because if helicopter money catches on then the likelihood of an inflation spike increases significantly.