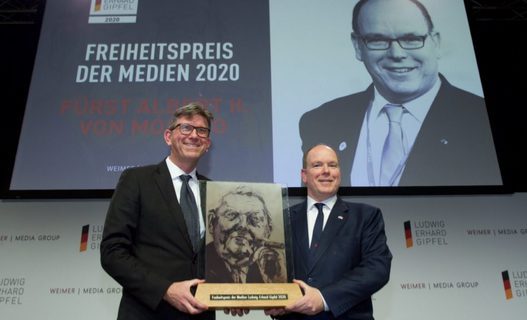 The urgent need for action to protect the environment requires discussion in the media, and press freedom is fundamental, HSH Prince Albert said in accepting the annual Press Freedom Prize in Tegernsee, Germany.

“At the heart of the environmental combat, there is indeed a demand for truth. A truth that is primarily scientific. That is why the freedom to inform, in the field of the environment, is a requirement, which may also be a struggle. A fight that is based on this freedom of the media but that must also mobilise each of us,” the Prince said.

Welcoming Prince Albert, Thomas F. Hofmann, President of the Technical University of Munich, said: “More than any head of state in recent years, Prince Albert II has been committed to nature conservation.”

The prize was awarded last year to Jean-Claude Juncker. former president of the European Commission.