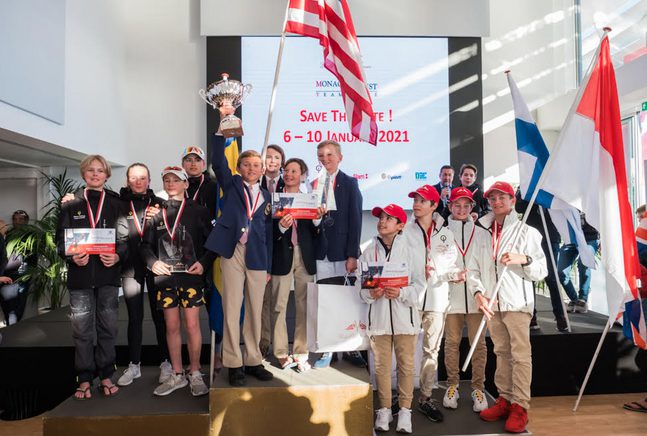 Organised by the Yacht Club de Monaco with support from FxPro, Eventica, Fon, clothing supplier SLAM and boatyard Erplast, the curtain fell on Sunday on another successful edition of the Monaco Optimist Team Race (MOTR). This event has become a must in the team racing calendar as a unique opportunity for under-14 sailors from all over the world to compete on equal terms at a venue ideal for big events like this one.

“It’s always an honour and absolute pleasure to host this regatta,” said YCM General Secretary Bernard d’Alessandri. “We are pleased to continue working on this format, the team spirit concept of which is much more advanced than at other events.”

From start to finish this 11th edition kept its promises with 20 teams in competition from 19 nations represented by 80 young sailors, a first since the event launched in 2009. The exceptional conditions oscillating between 6-15 knots on a flat sea undoubtedly played a big role in the event’s success, enabling 207 matches to be completed without a pause over the four days of racing.

Third last year and equal on points with the Swedes from KSSS, the American national team arrived determined not to share but to dominate the podium. In the lead throughout the three-day qualifying round robin phase, they lost only two of their 19 matches, two defeats conceded against the Yacht Club Italiano, then the Ukrainians from the Odessa Black Sea Yacht Club. It was a game of musical chairs for the Monaco team, comprising Noah Garcia, Leonardo Bonelli, and Alessandro and Matteo Asscher. At the end of the first day they were lying 4th behind the Finns from Helsingfors Segelklubb, then looked like posing a threat to the top trio on Friday as they rose to 3rd in the provisional ranking, before being over-taken by the Ukrainians on day three of the qualifying phase.

The suspense was all over in a few hours on Sunday with final victory going to the United States. Leaders in the overall ranking from the start, the team from across the Atlantic well deserved their first place against fierce competition from a driven Swedish team always hot on their heels. Monaco finally snatched 3rd place from the Ukrainians, disappointed to see a podium finish slip from their grasp.

Above all the MOTR is an occasion for competitors to get together, as evidenced by the opening ceremony when everyone brandished a White Card as a sign of peace in the world. An initiative of Peace and Sport, chaired and founded by Joël Bouzou, it serves as a reminder of the importance of the values sport upholds.