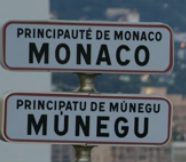 Due to major construction work, traffic leaving Monaco will be prohibited between avenue Hector Otto and its intersection with the Albert II tunnel, but will remain authorised in the direction returning to Monaco, from Monday January 13, in the evening to Thursday January 23 in the morning, from 22:00 to 06:00 on each night.

Traffic will also be prohibited, but in both directions, on Boulevard du Jardin Exotique between the Albert II tunnel and its intersection with Avenue Hector Otto, for three nights, from Tuesday January 28 to Friday January 31, 2020 from 22:00 to 06:00 on each night.

The project at the gates of Monaco – designed to ease traffic into the Principality = consists of 50 dwellings and a public car park of 1,820 spaces on fifteen levels, 14 spaces dedicated to touring coaches, a logistics platform for 4,000 to 5,000 small parcels per day, as well as around 5,000 square metres of offices.