Protesters target BNP in Paris over loan to oil company 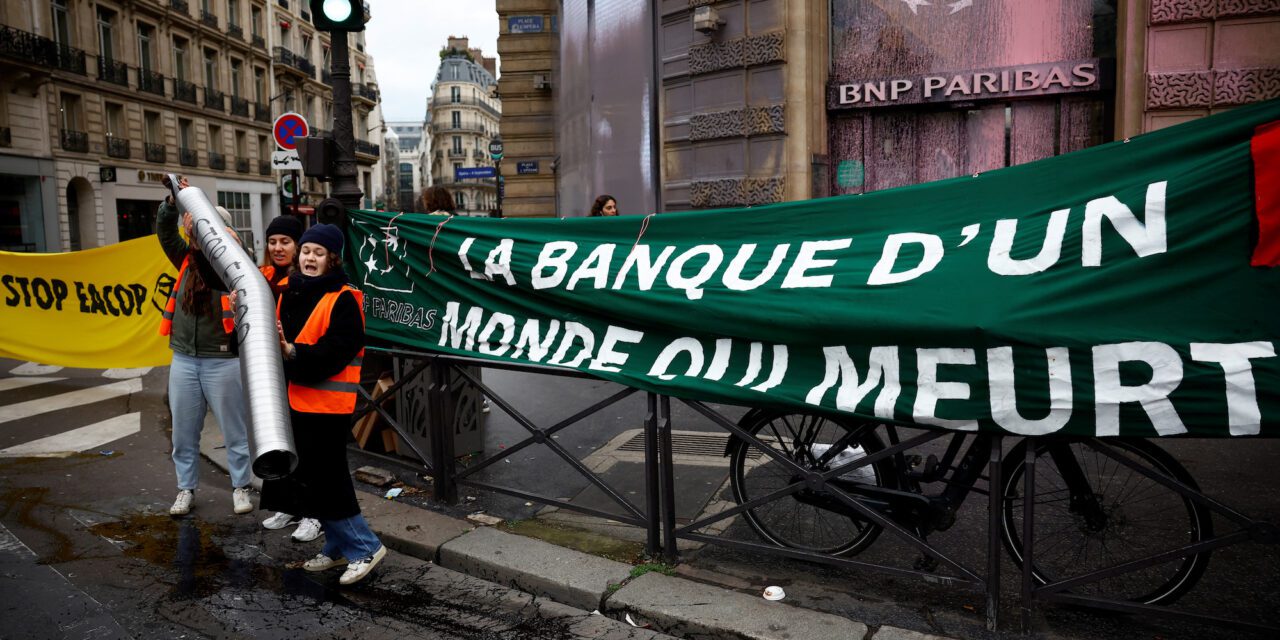 PARIS (Reuters) – Protesters from ecological movement Extinction Rebellion rallied outside a BNP Paribas building in Paris on Friday to oppose the French bank’s loan to an oil major leading in an East African oil pipeline project.

Some 40 participants sprayed the facade of a BNP office in the central Opera quarter with fire extinguishers and blocked a nearby street with a mock pipeline labelled “STOP EACOP”. Fourteen protesters were held by police, the group said.

EACOP is the acronym for the $3.5 billion East African Crude Oil Pipeline, a project run by France’s TotalEnergies whose construction licence was approved by Ugandan authorities on Thursday.

Extinction Rebellion said its protest, which was joined by other campaign groups including Fridays for Future, was timed to coincide with the start of drilling by TotalEnergies of exploratory oil wells in Uganda’s Murchison Falls National Park.

Extinction Rebellion said the national park was the “largest biodiversity reserve” in Uganda.

EACOP will stretch 1,443 kilometres (897 miles) from Uganda to Tanzania, with plans to send out up to 246,000 barrels of crude oil per day to international markets via the port of Tanga as early as 2025.

A TotalEnergies spokesperson said that while one-third of the project was located in Murchison Falls, oil development activities would cover just one square kilometre, roughly 0.03% of the national park area.

“TotalEnergies is absolutely aware of how sensitive is the area in which it operates and it is committed to take the measures needed to avoid, reduce, compensate its impacts on it,” the spokesperson said.

BNP Paribas decided not to finance the EACOP project in 2021, but last year participated in a one-year liquidity loan of $8 billion to TotalEnergies as one of a dozen banks.

One protester, referring to the loan, said “this blank check allows TotalEnergies to finance absolutely anything it wants, so yes BNP Paribas may not directly underwrite the project but it still remains the second-largest financial partner.”

In a statement on Friday, the bank said it “supports energy companies that are strongly committed to the transition of their models … to reorient financing toward low-carbon energy sources.” The bank has a goal to finance 30 billion euros ($32.5 billion) of renewable energy projects by 2025.

Climate change activists from Extinction Rebellion France hold a pipeline replica after spraying paint on a BNP Paribas bank building during a protest against TotalEnergies and the East African Crude Oil Pipeline (EACOP) project, in Paris, France, January 20, 2023. The slogan reads “The bank of a dying world”. REUTERS/Sarah Meyssonnier