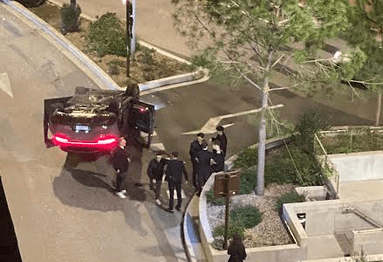 Several occupants of a car that overturned on ave. Princesse Grace, close to number 39, at about 06:00 on New Year’s Day were injured and taken to hospital, according to eye-witness reports. None of those hurt were seriously injured.

The avenue was closed until about 08:00 while an investigation took place and the badly-damaged vehicle removed. A number of parked vehicles were damaged during the incident.

PHOTO: Before the emergency services arrived on the scene Provided by a NEWS.MC reader