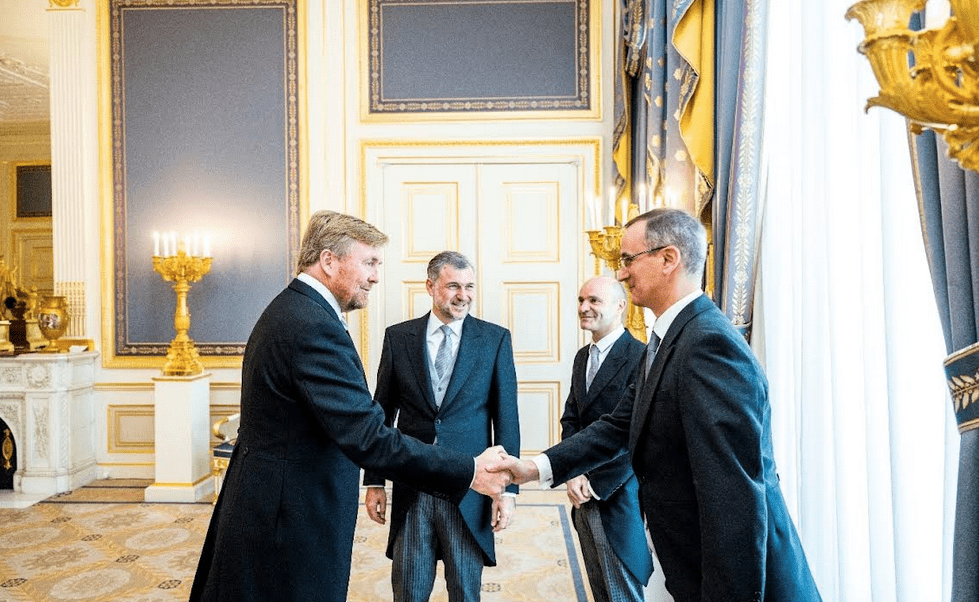 His Excellency Mr Frédéric Labarrère, Ambassador of the Principality of Monaco to His Majesty the King Willem–Alexander of the Netherlands, presented his credentials during a solemn ceremony at the Noordeinde Palace in The Hague.

The Ambassador and the delegation accompanying him, composed of MM. Johannes de Millo Terrazzani and Jean-Baptiste Blanchy, Advisors, were first welcomed into the Court of Honour of the Palace by the Royal Guard.

After the review of the Royal Guard and the signature of the guest book, the Ambassador presented his credentials, in the salons of the Palace, to His Majesty King Willem-Alexander, who was accompanied, for the occasion, by the Grand Master of the Royal Household and the Director of Protocol.

During the private meeting that followed, Monaco’s initiatives in the field of the environment was recalled as well as the various links between the two countries, particularly in the field of sport.

Following a very cordial exchange, during which the environment and sports ties were discussed, the Ambassador assured His Majesty King Willem- Alexander of his commitment to maintaining and strengthening the excellent relations between the Principality of Monaco and the Kingdom of the Netherlands.

PHOTO: H.E. Mr Frédéric Labarrère, new Ambassador of Monaco to the Netherlands, presented the Monegasque delegation to His Majesty King Willem-Alexander in the Salons of the Noordeinde Palace in The Hague. (From left to right: H.M. King Willem-Alexander, the Ambassador, Mr. Jean-Baptiste Blanchy and Mr. Johannes de Millo Terrazzani) © Jeroen van der Meyde