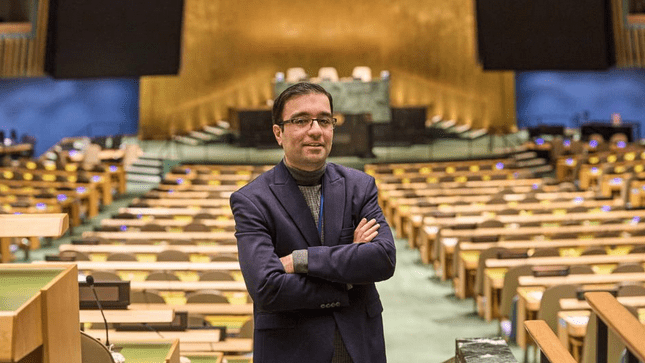 A TRT World contributor has won an international award for reporting on the climate crisis and global warming.

Sponsored by the government of Monaco, the award recognises the best work of journalism in print and broadcast media for coverage of the climate crisis, biodiversity and water, Turkish news channel TRT reports.

At a ceremony in New York City on Friday, Kourosh Ziabari from Iran was named as the winner of the silver medal of the Prince Albert II of Monaco and United Nations Correspondents Association Global Prize for Coverage of Climate Change.

He received the prestigious award for his story on the Iranian government’s pattern of unbridled dam construction leading to the drying up of Lake Urmia, the Middle East’s largest saltwater lake.

The investigative story, published on July 29, was titled ‘How Iran’s dam-building obsession is killing Middle East’s largest lake.’ It featured an interview with the noted Iranian climate scientist Kaveh Madani.

Ziabari was also recognised for a report he had published in Asia Times on the water wars erupting in Iran due to climate change, the government’s mismanagement of the natural resources and its inadequate investment in infrastructure.

Sponsored by the government of Monaco, the award recognises the best work of journalism in print and broadcast media for coverage of climate crisis, biodiversity and water. Emilio Godoy from Mexico won the gold medal and Samaan Lateef from India was the bronze medalist.

The 26th annual United Nations Correspondents Association (UNCA) and Dag Hammarskjold Fund for Journalists ceremony took place on December 9, and the United Nations Secretary-General Antonio Guterres and the President of the UN General Assembly Csaba Korosi were the special speakers.

An award-winning journalist, Kourosh Ziabari is an alumnus of the Chevening Scholarships granted by the UK’s Foreign, Commonwealth and Development Office and a 2022 World Press Institute fellow with the University of St. Thomas. He contributes to such publications as Foreign Policy, Al-Monitor, The New Arab and Middle East Eye. He is also the Iran reporter of Asia Times.

On December 15, he will be accepting the Foreign Press Correspondents Association’s Professional Excellence Award, also in New York City.