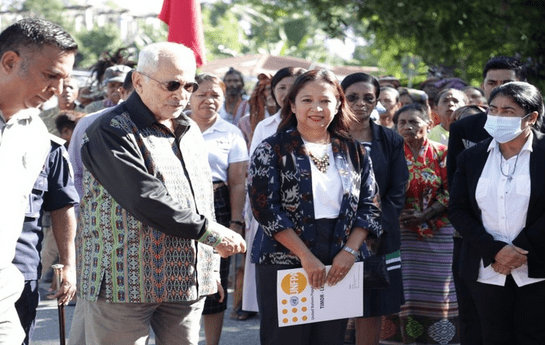 “The world does not exist without mothers. Investing in health facilities is very critical in saving the lives of mothers and babies in Timor-Leste,” said President Jośe Ramos Horta during the launch.

The BEmONC centre, partly financed by Prince Albert II of Monaco and UNFPA with funding from the Australian Government through the Department of Foreign Affairs and Trade (DFAT), is a welcome relief to over 6,000 mothers in need of urgent and quality maternal and reproductive health care facilities.

Apart from being equipped with medical equipment, the centre will also be supported by trained health care providers to help identify mothers at risk before, during and after childbirth.

While the Government of Timor-Leste has improved provision of healthcare services in the island nation since its independence, healthcare services are limited especially in hard-to-reach areas like the mountainous terrains of Manufahi and neighboring municipalities.

Evidently, the lack of skilled birth attendants during pregnancy and child birth is a big challenge in addressing Timor-Leste’s high maternal and infant mortality rates in the region.

According to Demographic Health Survey 2016 (DHS 2016), only 48 percent of births were assisted by a skilled attendant and 32 percent occurred within a health facility.

Since 2018, over 140 trainees (39 doctors and 103 midwives) have benefited from Emergency Obstetric and Newborn Care (EmONC) training facilitated by Ministry of Health through National Health Institute (INS) with technical support from UNFPA.

“UNFPA works closely with the Government of Timor-Leste and development partners to bring an end to maternal deaths and protect the health of mothers and babies.

“UNFPA will continue to provide technical support to the National Health Institute in curriculum development with information package for doctors and midwives to reduce deaths during child birth,” said Pressia Arifin-Cabo, UNFPA Country Representative in Timor-Leste.