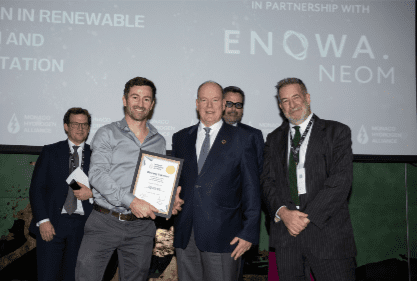 The Monaco Hydrogen Alliance, the Monaco-based non-profit association focused on promoting the use of renewable hydrogen
in transportation, held the first edition of its annual Monaco Hydrogen Forum on November 21-22, 2022 in the presence of HSH Prince Albert II.

The high-level discussions at the Monaco Hydrogen Forum focused on tangible ways to advance the use of renewable hydrogen to clean up land, air and sea transportation.

Workshops led by groups such as the Alliance’s research partner Geneva Graduate Institute as well as teams of experts from consulting groups Deloitte and McKinsey and Company centred on two critical aspects pertaining to the theme of “Moving the World with Green Hydrogen”: advancing innovation in the field of renewable hydrogen and transportation, and building a supporting ecosystem – including regulatory, societal, financial, and legal – to ensure effective implementation before the end of the decade.

With this incredibly successful inaugural edition of the Monaco Hydrogen Forum we have launched a global movement to accelerate the development and use of renewable hydrogen as a 100 percent clean fuel for transportation.” John Rossant, President, Monaco
Hydrogen Alliance said.

The Forum was also the occasion to award the inaugural Monaco Prize for Innovation in Renewable Hydrogen and Transportation.

Launched in partnership with Strategic Partner ENOWA in the Spring of 2022, the global competition assessed 52 solutions from 16 countries. During the Forum, some eight finalist organisations were invited to pitch their solutions in front of the Prize s Jury:
Genevos/France; Hydrox Holdings/South Africa, Hysilabs/France, Hyon/Norway, Gaussin/France, Green Independence /Italy, Zesst
by Almatech/Switzerland, Helion by Alstom /France.

Upon delivering the Prize, Prince Albert II said “We need to move forward to find solutions. Hydrogen is one of the solutions.”

John Rossant, President of the Monaco Hydrogen Alliance, declared: “With this incredibly successful inaugural edition of the Monaco Hydrogen Forum we have launched a globalmovement to accelerate the development and use of renewable hydrogen as a 100 percent clean fuel for transportation. Indeed, the Alliance is the first global platform exclusively dedicated to transportation and green hydrogen, where industry leaders and experts and top policymakers from around the world can unite to work together for a cleaner and more sustainable world by advancing the use of hydrogen in transportation.”

Rossant added: “There is no more fitting place in the world for this important high-level discussion than Monaco, whose head of state Prince Albert II has long been a courageous voice to advance sustainability, biodiversity and protection of the world’s oceans.”