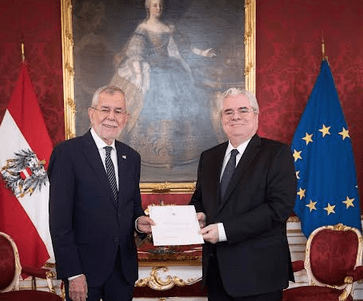 The new Ambassador of the Principality to Austria, HE Mr Lorenzo Ravano, presented his Letters of Appointment to the President of the Republic of Austria, Mr. Alexander van Der Bellen in Vienna on Thursday, November 3.

The official ceremony took place at the Hofburg Imperial Palace, the official residence of the Austrian President.

During the private meeting that followed, the Ambassador congratulated the President on his re-election last October, and expressed his desire to strengthen bilateral relations and cooperation between the two countries in the diplomatic, economic and cultural fields.

The President brought up the situation in Ukraine. Monaco’s Ambassador recalled the condemnation by HSH the Sovereign Prince of the military aggression against the country, reaffirmed the application of all the sanctions decided by the European Union, and mentioned the involvement of the Monegasque Red Cross and other non-governmental organisations in giving aid to Ukraine and its nationals, a number of whom have been welcomed in Monaco.

Finally, the President and the Ambassador reaffirmed their convergence of views on the climate issue climate, as the UNFCCC’s COP27 takes place in Sharm el-Sheikh.

The President welcomed the personal commitment of HSH the Sovereign Prince and the ambitious objectives of His Government in the field of energy transition.