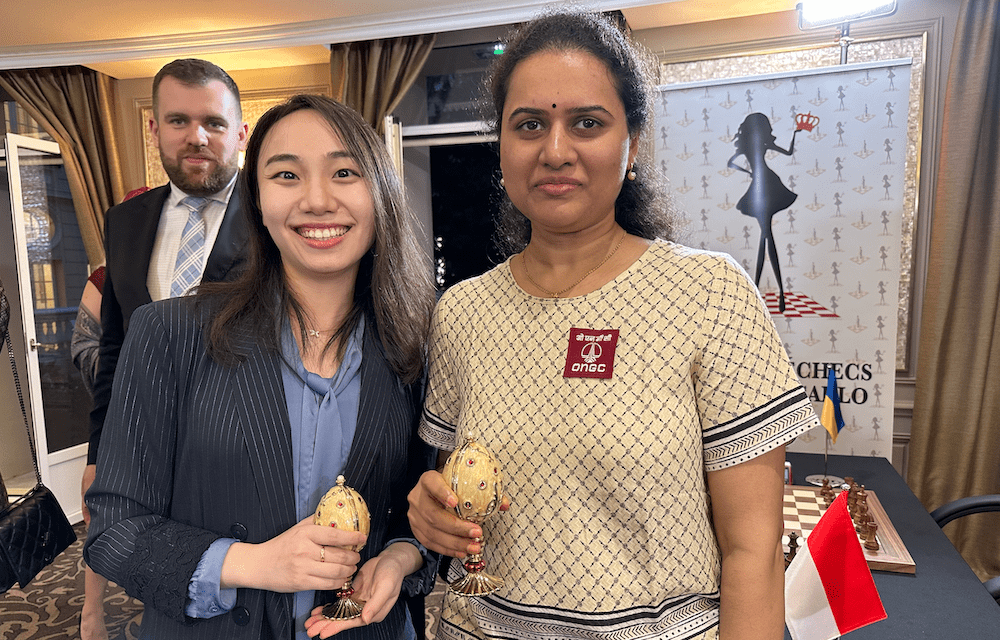 The glamorous Hôtel Hermitage Monte-Carlo is hosting a top-level international women’s chess tournament that will see female Grand Masters face off against each other for the right to challenge current world champion Ju Wenju of China.

Pool A of the Women’s Candidates tournament, organised by the Monaco Chess Federation, takes place from October 25 to November 6.

This Pool will see a clash between Humpy Koneru and Anna Muzychuk (first Quarter-Final), and Lei Tingjie and Mariya Muzychuk in the second Quarter-Final.

Pool B of the Women’s Candidates will be staged under the same conditions, and will be hosted in the ancient city of Khiva, in Uzbekistan, from November 28 to December 11.

The Final that will determine the challenger to Ju Wenju’s Women’s World Chess Champion, played over a distance of six games, will take place in the first quarter of 2023.

While the main sponsor for the Monaco event is the Société des Bains de Mer (SBM), the organising Monaco Chess Federation is no newcomer when it comes to championing female chess.

In fact, president of the federation Jean-Michel Rapaire has been named a “He for She of the Year” of the FIDE (International Chess Federation). To NEWS.MC he said the journey of dedication to and promotion of female chess started in Monaco in 1993 with the match between Zsuzsa Polgár and Nana Ioseliani and continues to this day. “It is an incredible honour to have the female chess elite competing in Monaco.”

The Ukrainian sisters and world champions Anna and Mariya Muzychuk have competed in Monaco previously. Both started playing chess when they were two years-old and started taking part in competitions at the age of five.

Indian Chess Grand Master Humpy Koneru is the holder of the 2020 Women’s World Rapid Chess Championship, and the World Championship title is the only accomplishment that has eluded Humpy so far – something that she is very eager to fix.

Tingjie Lei has very convincingly represented team China on various occasions. She was part of the gold medal-winning Chinese female team in the 2016 Asian Nations Cup in Dubai and in the 2018 Olympiad in Batumi. Being the youngest and therefore the less experienced player, she will certainly try to make the best of her first participation in an event of this calibre.

The commentator for the games is Chess Grand Master Igor-Alexandre Nataf. He told NEWS.MC that there certainly is a difference between female and male games. “Females are more and more prone to take a risk. If you want to know what’s the latest in chess, watch a female game.”

The drawing of colours was made by the Monegasque boxing champion Hugo Micallef. Humpy Koneru (against Anna Muzychuk) and Lei Tingjie (against Mariya Muzychuk) start with White in the first game. The competition begins on Tuesday, October 25, at 15:00. The games at Hotel Hermitage Monte-Carlo are open to the public to watch.