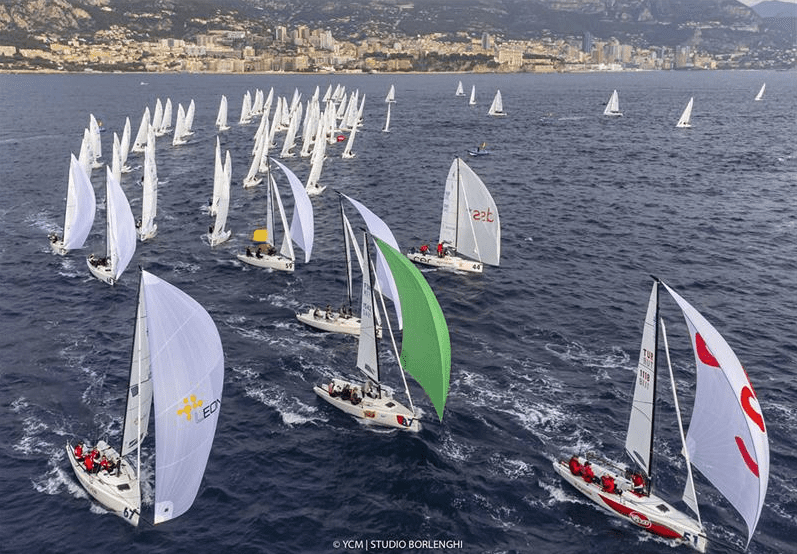 Twenty-three nations, 90 boats, 400 sailors and a field worthy of the wildest dreams heralded the J/70 World Championship, organised for the first time by Yacht Club de Monaco in collaboration with the J/70 International Class, the Club reports.

“It was exceptional and an honour to welcome all these champions. All the eyes of the sailing world were riveted on our Principality,” said Yacht Club de Monaco General Secretary Bernard d’Alessandri.

As part of the collective ‘Monaco, Capital of Advanced Yachting’ approach, HSH Prince Albert II of Monaco, YCM President, came on Friday to greet everyone involved in the organisation including some 50 volunteers who comprise the Flotte des Commissaires, the international Race Committee, the Jury members and all the contestants.

The Championship also benefited from the support of the Monegasque Sailing Federation, FxPro, Xerjoff, Sebago and technical sports clothing brand Slam which supplied garments for all crew on the podium. Tommaso Chieffi, ambassador for the Italian brand, came to watch the events: “We often take the America’s Cup regattas as an example, but today I have witnessed exchanges of such quality both on the water and ashore, such a spirit of sportsmanship. Real class!”.

There is no shortage of superlatives to describe the total mastery, exemplary helmsmanship and tight mark roundings achieved by the crew on Killian Wagen’s Découvertes. The Swiss boat, winner of the 2022 Primo Cup, blew the competition away in the Open category with characteristic Swiss consistency. “We came here with one goal and we are delighted to have achieved that,” said crew member Luke Patience. “It’s a great team and we just conserved energy to give it our all today, even though we were constantly nervous about our decisions on the water”.

However, it was impossible to make predictions the level was so high at this Worlds, with more than 50 trophy-winning sailors be they from the Olympics, America’s Cup or other one design circuits, like the legendary Torben Grael, with five Olympic medals on his tally. As crew on the J/70 To Nessa, he cracked the first race in a steady 8-12 knots with great skill but had to concede victory ahead of a white-hot fleet.

Another team that did spectacularly well was Leonteq led by Monegasque Pierrik Devic who emerged this Worlds Vice-Champion at home. A tremendous reward for this class regular: “It was a huge surprise but is the result of all the hard work I’ve put in with my crew in the last year. It was an amazing field with big names in sailing and we are very proud to come 2nd, which we owe to the professionalism of our crew and our consistency”. The Americans on Peter S. Duncan’s Relative Obscurity completed the Open podium.

“It’s a real pleasure and honour to hold such an event. That hasn’t happened since 1976. Above all it was great to see our Monaco crews shine,” said YCM Vice-President Pierre Casiraghi.

Tight from the start

The level was such that gaps never widened. Everyone understood that if they got the start right, the race was half-won; and that it was not worth being greedy and risking a black flag and potential disqualification. While the axe may have fallen on a dozen impatient boats, others showed great skill like Australian Tim Ryan’s crew (Vamos) who stood out in the One Pro (one professional aboard) category. He beat the Monegasque Ludovico Fassitelli (Junda), with the Spaniard Mon Canellas (Outlier) in 3rd.

After the victory in the Open, it was another win for the Swiss this time in the Corinthian (amateur) group with a well-deserved first place for Nick Zeltner’s Quarter2eleven. He snatched victory from under the nose of Spaniard Luis Bugallo (Marnatura), while the French Team Youth FFV led by Timothé Rossi was 3rd.

Attentive to the environment

Summer-like temperatures, lack of wind and an almost immoveable anticyclone certainly challenged the experts. “It was very unusual, even exceptional for October,” noted Gianfranco Meggiorin, President of Navimétéo in charge of daily weather forecasts for the crews. “We have seen this in different regions of the Mediterranean. Suffice to say that things are changing. There are phenomena occurring, situations that are still unknown so we have to continue to study the data and try to understand what’s happening”.

Organised in partnership with RAMOGE, one of the oldest environmental protection agreements in the world, involving France, Monaco and Italy, the Worlds was an opportunity to highlight actions taken by YCM to mitigate environmental impacts. “Our committee boat has been run on biodiesel for the last five years. Those of our safety boats which are not electric operate on biofuel. We have dynamic positioning buoys that avoid any damage to the seabed, and recently installed in the YCM Marina recyclable polymer floats, which have mooring arms, not chains, to protect the seabed and are easier to use,” explained Olivier Campana, President of the Monaco J/70 Class Association.

The next meeting in the Principality will be Act 1 of the Monaco Sportsboat Winter Series (3-6 November 2022), not to mention two YCM boats competing in the Route du Rum (Malizia-Seaexplorer with Boris Herrmann and Oren Nataf’s Rayon Vert) which starts in St Malo on November 6.