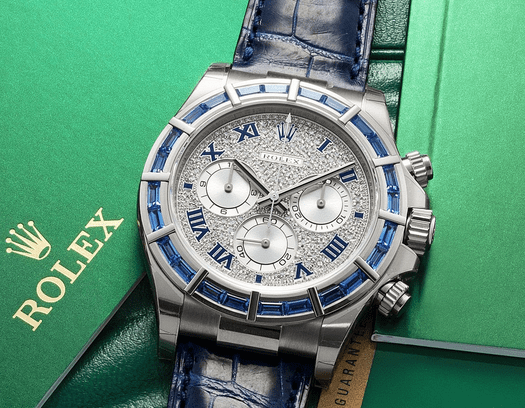 When it comes to collecting watches, there is arguably no more sought after and desirable timepiece than the Rolex Daytona. The king of the chronographs since 1963, the watch has evolved, been refined and worn many faces but always stayed true to its roots. The word icon is a word that is overused, but it is truly fitting for the crown’s Cosmograph, Monaco Legend Group says.

Rolex began making chronographs as early as the 1930s, but the watches that would ultimately become the Daytona began appearing in the 1950s, as Oyster-cased chronographs. The true Pre-Daytonas were launched at the beginning of the 1960s as reference 6238, a 36 mm, three register chronograph, with the tachymeter scale on the dial. Then in 1963, the Daytona was born with the unveiling of the reference 6239 Cosmograph Daytona. The main difference between this and previous Oyster chronographs was the presence of a tachymeter bezel, which replaced the dial-based tachymeter that had been in use for the decades before. The manual wind Daytonas continued to be made until 1988 and were available with either a steel tachymeter bezel or black plastic tachymeter.

In 1988 Rolex unveiled the Cosmograph’s new era, with the Daytona Perpetual. The new Daytona had a larger case, sapphire crystal, crown guards and, most importantly, an automatic movement. For the first 12 years of its life, the Daytona Perpetual was fitted with a modified Zenith El Primero movement. It was these watches that began the phenomenon of the waiting list, which has never ceased for the Daytona. In 2000 Rolex introduced the in-house movement, calibre 4130, which is still in use today. Where the manual wind watches were, primarily, sports utility watches, with the Daytona Perpetual Rolex began extensively gem setting the cases and using different stones and gems on the dials.

The Monaco Legend Group’s October auction takes place on October 22 and 23 at the Hotel Meridien, starting at 14:30. To register to bid, please click on the link: https://www.monacolegendauctions.com/access/1