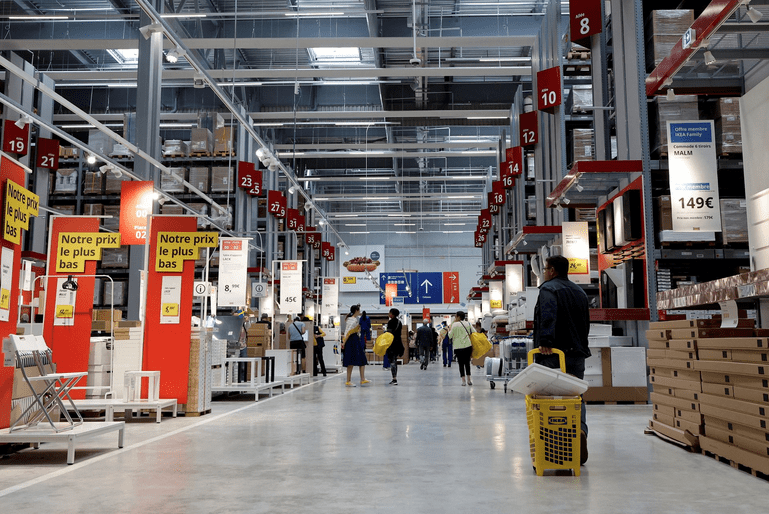 Mrs Daniels loves IKEA. We have fond memories of IKEA in a multitude of European countries. When the boys were young we used to take them to the children’s corner and leave them there for hours while we devoured tasty Swedish meatballs. However, when the older one was 12 they wouldn’t let him in any more.

The latest visit was my first to the newish Nice IKEA, although Mrs Daniels had already been there with a friend on a reconnaissance mission.

We followed our shopping list of wine glasses, towels, mugs and other small items needed for expected guests more or less to the letter and I kept a rolling total until we got to 300 euros. My wife was shocked it all came to so much and I was pleasantly surprised when the checkout lady said the damage was only 207.

My strategy of rounding up the prices as an antidote to shopping hysteria meant that a number of items she really, really wanted were left behind for next time and money was saved.

It also meant there was more to spend in the Swedish deli section, and here we made up for our carefulness by lashing out on jars of herrings. We bought 20 of them, bearing in mind, too, that all this bottled fish could come in useful if Putin really isn’t bluffing. We already have the iodine tablets.

On the nuclear holocaust score we are reasonable confident that there will not be a nuclear attack on Monaco, as Putin has close connections here.

Since it was getting dark we started to head home. I was close to exhaustion from walking in ever-increasing circles and said so.

“I will have to be extra careful,” I said as we made for the A8 autoroute.

There was a lot of traffic on the on-ramp, and I accelerated quickly away from the toll booth, noticing at the last moment in the mirror a car going even faster competing for the funnel of road.

I had not seen that the on-ramp narrowed sharply with the use of a dog-leg angle, and we hit the kerb at speed and I knew at once there was damage.

I had to keep going and found a narrow refuge at the top where the ramp reached the main carriageway.

The nearside front tyre was slashed and ruined.

By the time we had taken all the shopping out of the boot and put on the regulation yellow vests the gendarmes turned up.

They were both about 14. In France, youngsters like this are allowed ride scooters with engines and to carry real guns. Frightening. However, they were very polite and helpful and told me that no way could I be allowed to change the wheel on the autoroute. A breakdown truck was called to take the car, the shopping and ourselves to a depot in Nice Nord or Menton, but not home.

Now it was almost completely dark. We all stared into the distance willing the rescue truck to appear. First to arrive was a man in a van from Vinci, the autoroute operator. He confirmed that a breakdown truck had been called, the lane was closed at the bigger toll booth, cones put in place, and there was a discussion on the topic of whether or not the wheel could be changed in situ.

Two energetic men jumped out of the breakdown truck, changed the wheel using a serious jack and not the toy town version in a matter of minutes, and issued a bill for… 207 euros.

Of course, by this time I was suffering from sticker shock, but what was so remarkable about the entire incident was that everyone involved was entirely helpful, calm, cooperative and friendly.

We were safe, the car was in one piece and we went back home to the suburbs of Monaco fully believing that our IKEA shopping trip had been a great success.

The first thing I did was open a jar of herrings.

Customers shop following the opening of an IKEA store in Nice, France, May 11, 2022. REUTERS/Eric Gaillard/File Photo