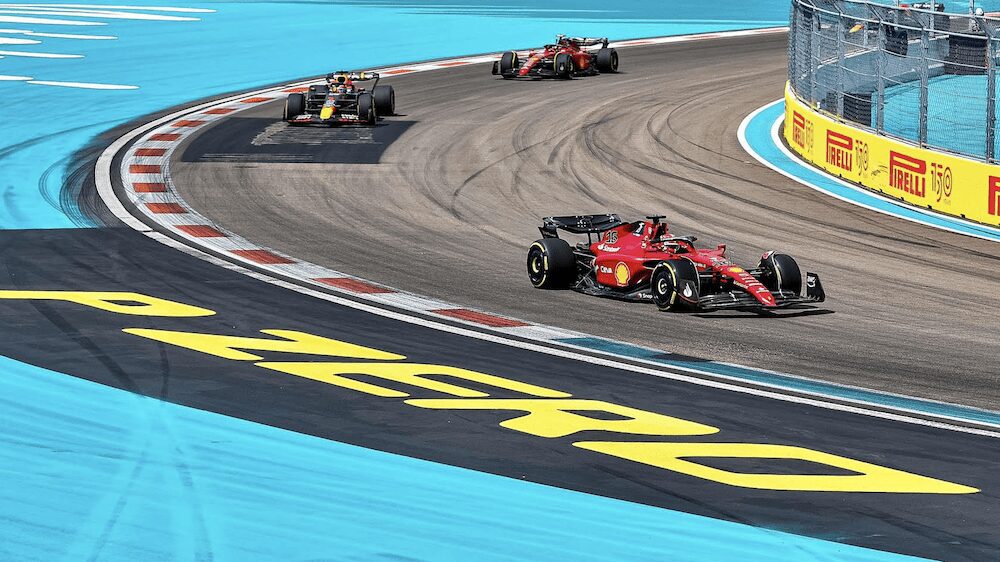 The highly anticipated Miami Grand Prix lived up to the hype, as the all-new circuit saw its fair share of on-track excitement. Pole-sitter Charles Leclerc led the pack away as the lights went out in a Formula 1 race for the first time in Miami.

Red Bull’s Max Verstappen managed to overtake Leclerc’s Ferrari teammate Carlos Sainz going into Turn 1 right after the race began. The Dutchman then began his pursuit of Leclerc, and overtook the Monegasque on the main straight at the beginning of the ninth lap.

It seemed like Verstappen was slowly but surely walking away with the win, adding seconds between himself and his rival.

Then the unfortunate happened. A clash between Pierre Gasly and Lando Norris sent the McLaren man spinning off the circuit, as his right-rear tyre was ripped right off.

This fiasco triggered a VSC on the 41st lap, which then became a safety car that cut into Verstappen’s lead, who could only resume his drive on the Lap 47 restart.

A revived Leclerc began to close the gap between himself and the charging Red Bull ahead, but Verstappen was able to hold off the two Ferraris in his rear view mirror to win the first Miami Grand Prix by 3.786 seconds.

Leclerc finished a close second, and his teammate Sainz finished off the podium taking third place, just ahead of Red Bull’s Sergio Perez in fourth.

A successful debut GP in this famous Floridian city will be followed by the Spanish GP at the Circuit de Barcelona-Catalunya on Sunday, May 22, and then the Formula 1 circus will return to Monaco for the 2022 Monaco GP on Sunday, May 29.