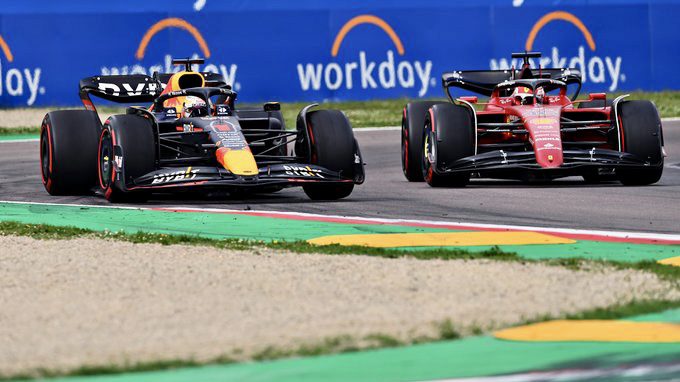 Max Verstappen was the winner of the first sprint race of the 2022 Formula 1 season, after a daring overtake on race leader Charles Leclerc in the dying moments of the race.

Friday’s qualifying session results established the starting grid at the Imola circuit on Saturday, April 23, which saw Verstappen in pole position lining up alongside Leclerc on the front row, with McLaren’s Lando Norris in third and Haas’ Kevin Magnussen in fourth place.

Leclerc delighted the home crowd with a rapid overtake on pole sitter Verstappen to claim the lead right as the lights went out to start the sprint race.

This moment of excitement was shortly followed by a different sort of drama, as Alfa Romeo’s Zhou Guanyu crashed out of the race after making contact with Pierre Gasly going into Turn 9 of the first lap. Green flags marked the resumption of racing on lap 5, and Leclerc led the pack, ahead of Verstappen and Norris in third place.

Leclerc zoomed away, as he made the most of his Ferrari to stay ahead of the pack, but Verstappen remained in the rear view mirror of the Monegasque. Verstappen deployed the use of DRS as he made his move on Leclerc in the closing laps of the race, overtaking the Ferrari which appeared to struggle for grip on the damp track.

Verstappen went on to win the race, almost three seconds ahead of Leclerc in second place. Sergio Perez completed the podium for Red Bull, having gained four positions over the course of the 21 lap sprint race.

Carlos Sainz impressed with his recovery drive, finishing fourth after a less than ideal qualifying session saw him start the race in tenth place, while Norris dropped back to a fifth place finish ahead of his McLaren teammate Daniel Ricciardo in sixth.

Meanwhile, Lewis Hamilton’s performance woes ensue, as he lost a position in the race to finish in 14th place.

The result of this sprint race set the scene, and the starting grid for the 2022 Emilia Romagna Grand Prix, which is set to begin at 15:00 on Sunday, April 24.