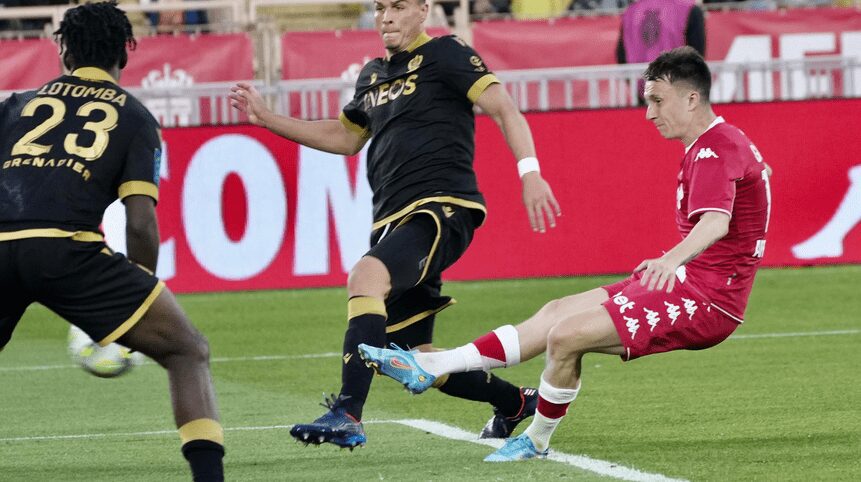 As the Ligue 1 season slowly draws to a close, the race for second place intensifies and the importance of the result of this Côte d’Azur derby, between AS Monaco and neighbouring Nice was not lost on either team at the Stade Louis II on Wednesday, April 20.

The match got off to a balanced start after a 19:00 kick off in front of stands full of local supporters, as both sides enjoyed near-equal possession while not shying away from taking shots.

It was looking like the players would return to the locker room at half-time with an empty scoreline, but Monaco midfielder Aleksandr Golovin managed to find the back of the net, making it 1-0 two minutes into the first half’s injury time.

A yellow card for Axel Disasi at the 52nd minute kept Monaco’s central defence on their toes, as Monaco defended a slim lead. A flurry of substitutions followed, but this did nothing to impact the scoreline as the game wore on.

Monaco came nail-bitingly close to extending their lead with a handful of shots on target in the dying moments of the match, but the full-time whistle confirmed Monaco’s victory with the scoreline still standing at 1-0 to the hosts.

This big win at home for the Monegasques against their neighbours takes Monaco up past Nice in the Ligue 1 table, and into fifth place.

Monaco’s next match will be away, against Saint-Étienne on Saturday, April 23.