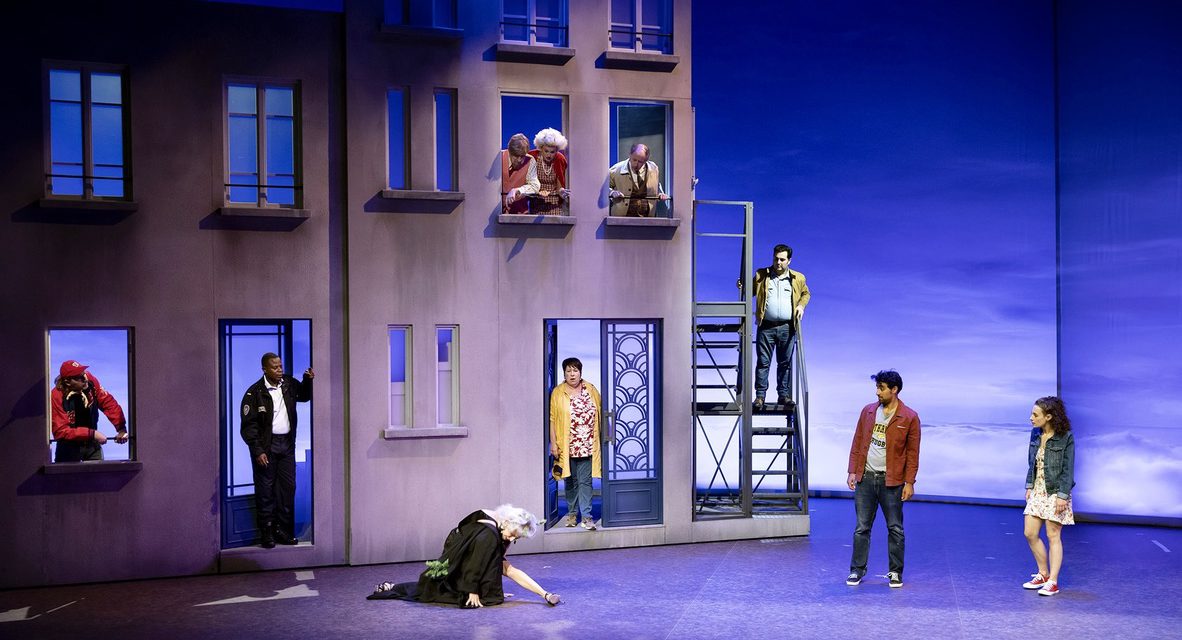 The enigmatic antihero Michael Morbius, dangerously ill with a rare blood disorder and determined to save others suffering his same fate. Dr. Morbius attempts a desperate gamble. While at first it seems to be a radical success, a darkness inside him is unleashed. Will good override evil – or will Morbius succumb to his mysterious new urges?

The film begins at 18:30 in the Cinema des Beaux Arts at the Princess Grace Theatre building on Tuesday, April 19.

The French play in which author and director Jean-Michel Ribes reinvents, with tenderness, the entire neighbourhood, a city, a country, the world we all inhabit without sparing “the frightening bullshit of fascism.”

An urban symphony, a mosaic of the time in which humour, Ribes says, “remains the only escape route”.

This performance will start at 20:30 on Thursday, April 21 at the Théâtre Princesse Grace. There is no break and the play will be followed by discussion with Jean-Michel Ribes and the actors.

Reserve your tickets at the Monte Carlo Ticket.

The Museum Kunst der Westküste, located in Alkersum on the North Sea island of Föhr/Germany, is presenting the Northbound. Connected by the Sea exhibition at the Oceanographic Museum of Monaco from March 19 to June 19, 2022. It brings together 24 paintings and photographs: historical and contemporary works which illustrate the role of the North Sea and the importance of preserving its coastal and marine areas.

Peder Severin Krøyer Fishermen on the beach at Skagen

The Northbound exhibition, scheduled as part of the Monaco Ocean Week, will be complemented by a scientific symposium entitled ‘The North Sea, a Sea of Solutions’, on May 11, 2022. All the works presented have a common denominator: the sea. For centuries artists have challenged themselves to ‘capture’ this subject which stands never still. In constant motion, the sea changes continually in its overall appearance, its colours, its temperament.

At times the sea captivates by its calm, smooth, reflective surface. At times it is immersed in green, blue or sometimes grey, interspersed with white crests formed by the waves. The Oceanographic Museum is open every day from 10:00 to 18:00 (last entrance at 17:30). Discover more on the Oceanographic Museum of Monaco website.

The Sporting, the Opera Garnier Monte-Carlo and Place du Casino will host some of the biggest international stars, including Anglo-Saxon artists who have been absent for two years.

Pink Martini and Imany with her show “Voodoo Cello” will perform at the Opera Garnier Monte-Carlo, Alicia Keys will be at the Place du Casino for the Monaco Red Cross Summer Concert and the Festival will continue at the Sporting Monte-Carlo with dinner shows: Queen Machine Symphonic for Fight Aids Monaco Evening, followed by Black Eyed Peas, James Blunt, Christina Aguilera, Rita Ora, Simple Minds, Gianna Nannini not to mention the Oriental Night with Myriam Fares.

The tickets are selling fast.