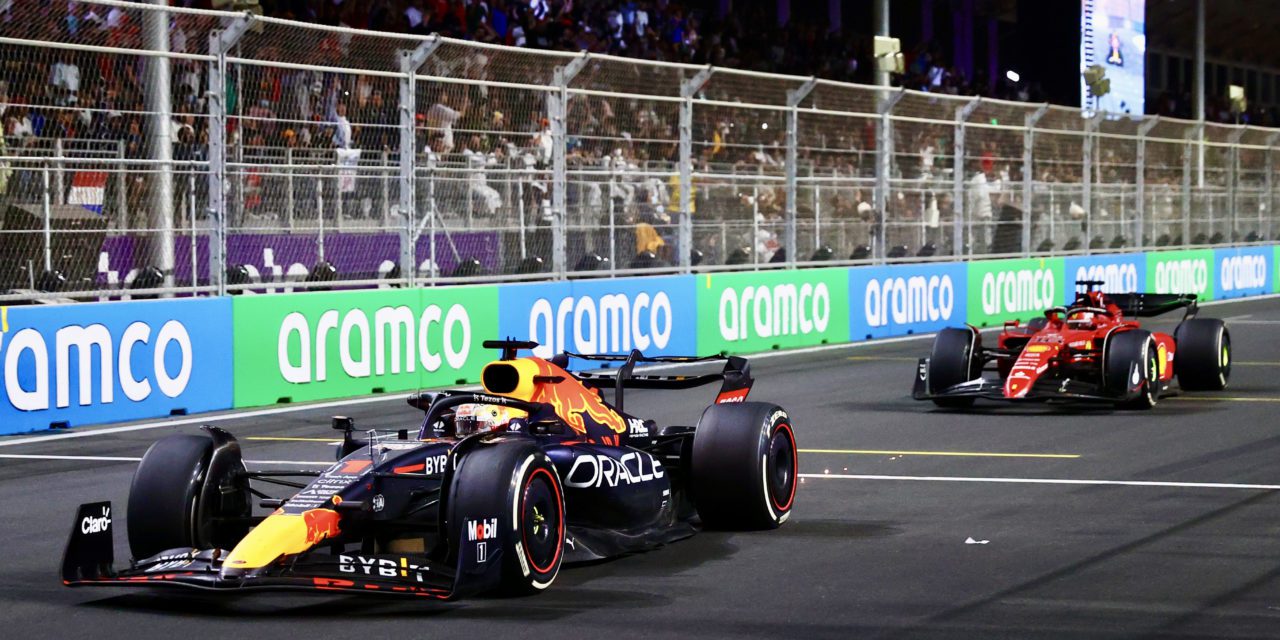 Charles Leclerc looked set to claim back-to-back wins as he put on another dominant display, this time at the Jeddah Corniche Circuit in the Saudi Arabian Grand Prix, but Max Verstappen managed to overtake the Monegasque in the closing laps of the race to claim his first victory of the 2022 season on Sunday, March 27.

Pole-sitter Sergio Perez led the pack from lights out until the 16th lap, when the Red Bull driver pitted. Williams’ Nicholas Latifi crashed at the final corner on the lap following on from Perez’s pit stop, triggering a Virtual Safety Car, which was followed by a regular Safety Car.

Leclerc, Verstappen and Carlos Sainz all took the opportunity to pit, leaving Perez behind in fourth place as the race restarted on the 21st lap.

Another VSC was imposed at the 38th lap, as McLaren’s Daniel Ricciardo slowed to a stop at the pit exit. The Australian was followed by Alpine’s Fernando Alonso, who also came to a halt in the same place a lap later.

By the time the VSC was lifted at the 41st lap, Verstappen found himself just one second behind Leclerc in the lead, and a tightly fought battle for first place ensued.

The Dutchman deployed the use of DRS to steal the lead on the 42nd lap, but Leclerc also made the most of DRS to reclaim the lead on the following lap. It wasn’t until the 47th lap out of 50 that Verstappen regained the lead from Leclerc, who was struggling for grip on tired tyres.

In the end, Verstappen just about managed to keep Leclerc at bay, and won by a margin of just 0.549 seconds between himself and Leclerc.

Sainz completed the podium with a third place finish in his Ferrari, while Perez crossed the line two seconds later to claim a fourth place finish.

In fifth place was Mercedes’ new driver George Russell, who managed to make the most of what appears to be a flawed W13 car. His teammate, Lewis Hamilton rounded out the point taking places with a distant tenth place finish.

Lance Stroll, Alex Albon, Valtteri Bottas, Alonso and Ricciardo were the five drivers who did not cross the line in Saudi Arabia, while Mick Schumacher and Yuki Tsunoda did not begin the race, with Mick suffering a serious crash in qualifying ahead of the race.

As it stands in the drivers’ rankings, Leclerc still tops the leaderboard with 45 points, a whole 20 points ahead of Verstappen in third place. The next opportunity to score points will arrive on Sunday, April 10 at the Australian Grand Prix, which returns for the first time since 2019.

Featured image courtesy of @redbullracing on Twitter, Verstappen and Leclerc cross the line with 0.549 seconds between them