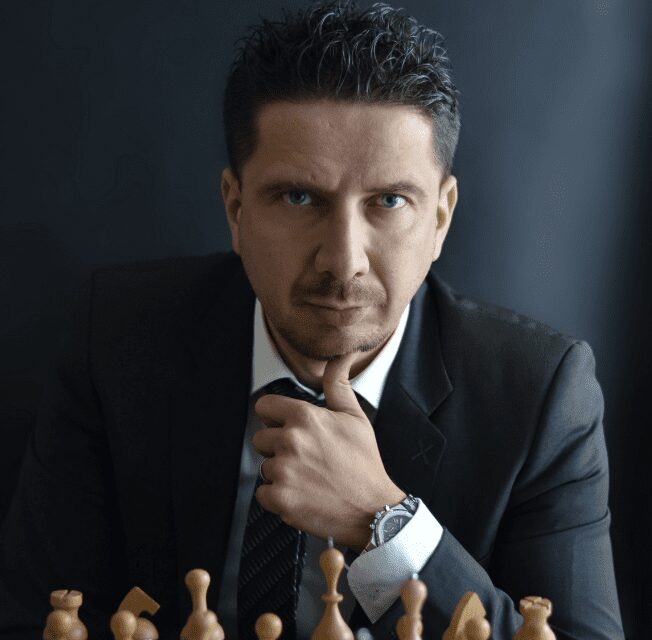 Cédric Biscay, President & CEO of Shibuya Productions, has only recently returned from Dubai where he was part of an official delegation representing Monaco at the World Expo. In the presence of HSH Prince Albert II the delegation and the guests celebrated Expo’s Monaco’s National Day on November 13. “It was totally crazy for me because it was probably one of the first times ever for Manga being so prominently featured in the World Expo,” says Cédric, sitting comfortably in his spacious office on Rue du Portier in Monaco.

The manga in question is Blitz, a comic book series written by Cédric and illustrated by Daitaro Nishihara starring Garry Kasparov, the name almost synonymous with the game of chess – its ultrafast variation is the main theme of the storyline of Blitz.

Cédric & Garry Kasparov over a game of chess at the official public presentation of Blitz instalment during the Cannes Film Festival 2019. Garry Gasparov is not only one of the characters but also offers invaluable proffesional support @Shibuya Productions

Eighty percent of the story is set in Japan and 20 percent in Monaco, even chef d’etat HSH Prince Albert II is featured in the plot and drawn as a manga character. “I could have asked him directly but wouldn’t dare to let him feel uncomfortable in case he opposed the idea, so I sent an official request to the Palace – all according to protocol and the answer came almost immediately: Yes!”

Cédric humbly says he works in a small company in the entertainment industry – “But we have big ideas.”

As a small boy from Nice, reading and watching animation movies in Manga-style he had an incredible fascination with all things Japanese. He also knew that this industry was his future.

“I really wanted to work in the Manga and video game industry but the problem at that time was I couldn’t successfully find the clients who would be able to pay me enough to survive”.

After the first visits to Japan in his early 20s he understood how wide were the cultural differences between Europe and Japan. He also felt he had a deeper understanding that can be put to a very good use.

In 2002 Cédric Biscay started his own consulting company in France developing cooperation between European and Japanese businesses. His “self-proclaimed expertise” in the field has proven a great success. He attracted big names and built a very good reputation for himself.

“After IKEA failed to establish its shops in Japan, they contacted my company and I helped them to successfully rebuild their business there. You know, this was easy, IKEA couldn’t expect Japanese clients to behave in the same way as European clients would, Japanese people do not want to build their own furniture but if you offer a special assembly service with the furniture parts, suddenly you find common ground and IKEA is now fully established there.”

“Part of my job was bringing Japanese clients to Monaco and I was always made to feel very welcome here. I decided that I should establish my new company in Monaco. It is a great place for entertainment industry management, it’s a window to the world. When people read my business card they say: “Wow, you are from Monaco, how cool!”

Shibuya Productions, the animation and video games production company, the first and only such company in the Principality of Monaco was co-founded by Cédric Biscay and Kostadin Yanev in 2014.

In 2015 the company founded its branch in Japan and at the Los Angeles E3 – Electronic Entertainment Expo, the world’s largest trade show for the video game industry – announced its very first video game release.

It wasn’t just any video game, but the world’s most anticipated following on the Shenmue 1 and 2, an action – adventure game that follows martial artist Ryo Hazuki as he sets out in revenge for the murder of his father in 1980s Japan.

Originally Shenmue was the most expensive game ever developed, it attracted a massive world-wide cult following and in many lists appeared as the greatest video game of all time.

“When we announced that after 19 years of no news about the next release of Shenmue, Shibuya Productions in Monaco would release its sequel, we had more than 10,000 journalists in the audience. The joy and celebrations were incredible. Some people started to cry. There was no way back, we had to do it and we had to do it well.”

When the crowdfunding campaign was launched on Kickstarter in 2015, after 1 hour and 42 minutes it smashed the Guinness World record for Fastest Video Game Crowdfunding. Another world record broke after the campaign raised the highest amount ever recorded for a video game. The goal was set for $2 million but with the 69.320 contributors it ended with an astonishing $6,333,295.

And this was only the starting point for the Monegasque company that went on to produce several successful video games – including award-winning Swap Tales: Leon! – the first-ever video game produced in Monegasque and six other languages. The company released an animated film Lilly and the Magic Pearl, produced its own Manga series Blitz (number five was launched earlier this month) and created a fitness device Activ5 – combining the pleasure of gaming with physical activity. Part of its special edition’s proceeds is dedicated to the Princess Charlene of Monaco Foundation in order to finance projects with positive sport values. Shibuya Productions also co-produced the documentary Sad Hill Unearthed featuring Clint Eastwood, Ennio Morricone, James Hetfield and Jo Dante. It is available on Netflix and has been nominated at the prestigious Goya’s in Spain and won various prizes.

What was originally planned as a gala dinner marking the launch of the company became an annual MAGIC event: Monaco Anime Game International Conference. Each year 3000 of the most eager participants from around the world register online to enter the magic filled with industry stars, competitions, and presentations. The two-day event takes place in the Grimaldi Forum and is completely free to attend.

Cédric Biscay has achieved enormous success in a very short time. “People now tell me ‘you are part of the culture in Monaco’ and I am very humbled by that”.

What does he consider his biggest achievements?

“Organising MAGIC in Japan in November 2018. Based on our success in Monaco, Japanese authorities asked us to bring MAGIC to Kyoto which also became an annual event and the amazing thing was to welcome HRH Princess Akiko of Mikasa from the Imperial family of Japan. It was an incredible moment for me – bringing the culture born in Japan back to it via Monaco and be totally welcome, accepted and rewarded for it. In this industry it doesn’t get any better than that for me.”

HSH Prince Albert II with Cédric and Japanese ambassador to France and Monaco H.E.IHARA Junichi who presented Cédric Biscay with a mark of appreciation from Japan’s Foreign Affairs Minister KONO Tarô: “Thanks to your action promoting mutual understanding between Japan and Monaco. You have remarkably contributed to the friendly relationship between Japan and other countries. Please hereby accept my deepest respects, and recieve all due honours.” @Axel Bastello / Palais Princier