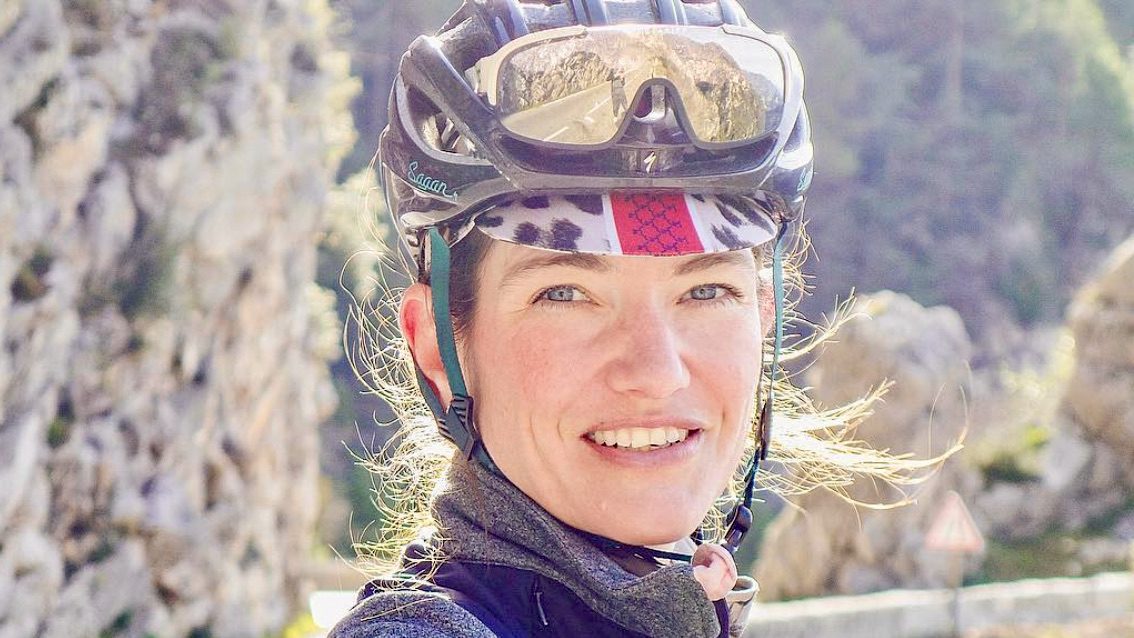 “The fact that we have over 50 pro riders (top world cyclists) living and training around here just shows what a great place for cycling this is. Optimal conditions for training all year around, and the routes are just breathtaking,” says Veronica Larsson, a professional cyclist since 2005 who represented the Swedish national team four times in the world championships, mostly in the road category but also once in the mountain bike category.

She moved to Monaco together with her then-boyfriend Gustav Larsson, Olympic silver medalist, in 2007.

Both her parents were top level cyclists but when she was little it was horses that she felt enchanted by. “I grew up in the countryside around Göteborg and I was a horse girl, everything in my life was about horses,” says Veronica Larson: “I was pretty good at horse riding and showjumping at a competitive level – and I was very competitive!, but I needed a very generous budget if I wanted to carry on and it just wasn’t possible for me.”

The oldest of six siblings soon found another sport worth pursuing: Motocross.

“I might have been too old for it – you need to start very young. And in Sweden – the men race in the same competition with women so it was really tough. After I broke most of the bones in my body – not all at the same time although sometimes it looked like it – my parents gently guided my attention towards mountain biking.”

Love at first sight. Especially with the endurance level of the sport – where Veronica – forever the competitor – found her niche. And her lifelong partner Gustav.

“It was at the world championship in Sweden, the Swedish team stayed in the same chalet and I was the only girl in a group of five riders. I noticed him straight away and he doesn’t even remember me from there. Would you believe it?” laughs Veronica adding that she told herself then that she “would never marry a guy like Gustav Larsson, he was always so very focused.” Eventually they did get together and last week on Thursday they celebrated their 10 year wedding anniversary.

Soon after meeting Gustav, Veronica joined the road cycling community in her early twenties and competed at a very high level with many international teams. She received a lot of recognition and became a well-known sports personality in Sweden.

“Road cycling was better known in Sweden and it was much easier to get sponsorship for me but saying that it is good to note that women cyclists still earn so much less than their male equivalents, we earned like coffee money compared to men. The situation is much better now and it was slowly improving when I was competing, but the gap is still very wide.”

In 2012 Veronica retired from professional cycling. Now a mother of two, eight year-old Gisela and six year-old Erik, she says she still lives in her “happy cyclist’s bubble”.

“My life still evolves around cycling most of the time. I coach, support and guide a few riders.”

As a result of more than 10 years in Monaco as professional cyclists both Veronica and her husband Gustav have acquired an impressive knowledge about cycling around the French Riviera.

In 2016 they established Vélo Monaco, a company that promotes and creates awareness of the benefits of cycling not just for health and fitness but also for the green environment in and around Monaco.

“Our main goal is to encourage people onto their bikes and get healthy and also create a greener environment to do it in. No particular level fitness is required, we cater for enthusiastic sports cyclists to recreational cyclists or those simply holidaying in the area. Here in Monaco and Cote d’Azur the options we can offer for our cycling holidays are endless.”

With a wide range of options from luxury cycling holidays or executive networking trips to a little more challenging Cycling Adventure, Veronica, the CEO of Velo Monaco, can guide you on your cycling venture from the very beginning. Her team includes mechanics, a sports therapist and even a dedicated chef.

She can also help you find the perfect bike for your level, personal requirements and size. “It’s so important to start well, with a good and appropriate bike you can prevent a lot of problems down the road”.

Even though bikes are like gold dust nowadays with Covid pushing demand as well as supply issues with parts and accessories, it is still worth waiting for the right bike and the right advice. Veronica and Gustav are both ambassadors for Specialized bikes and they work together with local Specialized dealer Two For Bike in Nice.

Just last year Veronica added another dimension to the business. She created and designed a casual chic premium cycling apparel brand, Vélo Larsson inspired by the iconic fashion houses, but as she puts it: “Designed by riders for riders”.

As she says, benefits of cycling need no advertising, the breathtaking beauty of this region is just in front of us, and on a trip you just as well may run into a famous rider doing their daily rides. There is one gem, a hidden boulangerie in the foot of several mountains where they all apparently like to stop for a break. It’s called….

And for all cycling enthusiasts: A celebration of cycling with more than 40 champions who will face each other off in the heart of Monte Carlo, along a street circuit that will offer breathtaking challenges among the Principality’s famous bends and straights. You can be part of it too… https://www.bekingevents.com/en/sport/