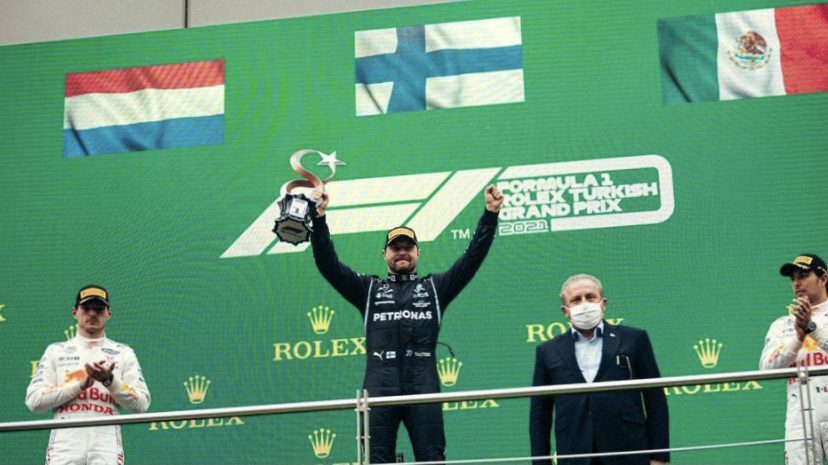 The Turkish Grand Prix was a wet one this year, as rain intermittently dampened the Istanbul Park circuit on the afternoon of Sunday, October 10. After a gripping 58 laps that kept teams on their toes, it was Valtteri Bottas who raised the winner’s trophy, while Monaco’s own Charles Leclerc finished fourth.

By the 11th lap, Hamilton had overtaken Pierre Gasly for fifth place. The race order was further reshuffled from the 35th lap, as a flurry of pit-stops saw driver after driver opt for intermediate tyres. With his opponents having already pitted or being in the process of pitting, Leclerc was clear in the lead thereafter.

However, the Monegasque driver gave up the lead to pit for a fresh set of tyres on the 48th lap, having decided that the decision to stay on his deteriorating tyres was far too risky and probably also that he didn’t want to end up like Lando Norris near the end of the wet and wild 2021 Russian GP.

With Leclerc now out of the way, Hamilton was in third place, and still on the same tyres that he started the race with. The Brit was determined to go for gold, but darker clouds and shredded tyres forced him into the pits on the 51st lap.

This put Leclerc back in third place, but Sergio Perez was able to overtake him on the 52nd lap to cross the line third, behind his Red Bull teammate, Max Verstappen, who finished the race in second place.

Unbothered by the commotion behind him, Bottas crossed the line in first place, and with that claimed his first victory this season. This would no doubt be an extra sweet victory for the Finn, who will be leaving the Mercedes-AMG team at the end of the current season.

Having suffered a bit of a fiasco near the end, Hamilton finished the race in fifth place, and fell six points behind Verstappen in the Drivers Championship ranking.

F1 fans will be disappointed to discover that they will have to go without a race next weekend, as the teams prepare for the United States Grand Prix on Sunday, October 24.